The European Union challenged the import duty USA to the WTO

BRUSSELS, 1 June. /TASS/ — the European Commissioner for trade Cecilia Malmstrom said that the United States decision to impose duties on products from the EU would weaken transatlantic cooperation. 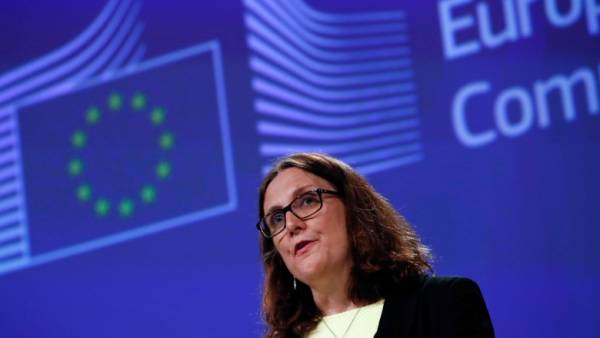 The EU challenged the US decision to impose duties on products from countries of the community in the framework of the world trade organization (WTO). This was stated at a press conference in Brussels, the European Commissioner for trade Cecilia Malmstrom.

“The EU today challenge the US tariff to the WTO,” she said.

In addition, the EU encourages all countries in respect of which the U.S. imposed duties on metals, to challenge this decision in the WTO.

“I urge all countries that suffered from the duties of States to take measures to the WTO,” — said Malmstrom.

The Commissioner added that the United States decision to impose duties on products from the EU would weaken transatlantic cooperation. “This decision weakens, transatlantic relations and the global market,” she said.

The European Union, after Washington imposed duties on the metals of the EU sees no possibility to continue negotiations with the U.S. on free trade. “We’re not going to negotiate,” — said Malmstrom.

She added that the EU has not held consultations with Russia on countermeasures against the imposition of US duties on metals. “Metal contacts with Russia yet was not” — said the Commissioner.