The President of Ukraine Petro Poroshenko attending today Ivano-Frankivsk region in the West of the country, called to condemn the intelligence agencies of Ukraine and Russia in connection with the re-enactment of the murder of journalist Arkady Babchenko. The operation of the SBU, he called the brilliant, and its members — heroes who showed the “true face of our enemy.” 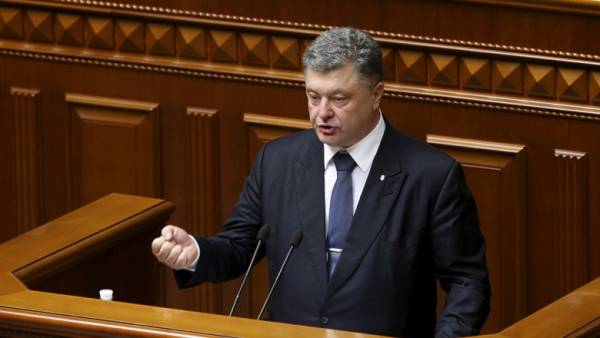 “Are sending weapons, entire trucks, are sending money to kill Ukrainians, journalists, kill government officials. When caught him, saying we didn’t act this way. You need to not blame Ukrainians, and Russia. Ukrainians do everything possible to stay together and defend themselves. I assure you, this will continue,” — said Poroshenko.

On the eve Poroshenko met with Babchenko, which the Ukrainian authorities on may 29 declared dead in the attack, and confirmed that it knew in advance about the staging. According to the President of Ukraine, “the attack on the journalist, organized the territory of Russia, is a desire to destabilize the situation in Ukraine, to show the inefficiency of the government and, of course, to kill someone is afraid of Russia most of all.”

Actions of the Ukrainian authorities caused a sharp reaction in the journalistic community. In particular, the General Secretary of “Reporters without borders” Christophe Deluar expressed his “deepest indignation” at the actions of the Ukrainian authorities. “For governments is always very dangerous to play with the facts, especially using journalists for their fake stories,” he wrote on Twitter.