Speculators rush to take advantage of the lack of new banknotes in denominations of 200 and 2,000 rubles. In the Internet posted thousands of ads on the buying and selling of new banknotes. The cost of the “Vladivostok-2000” in Moscow up to 5 000 rubles, while the “Crimea-200” sold in the country nearly 400. 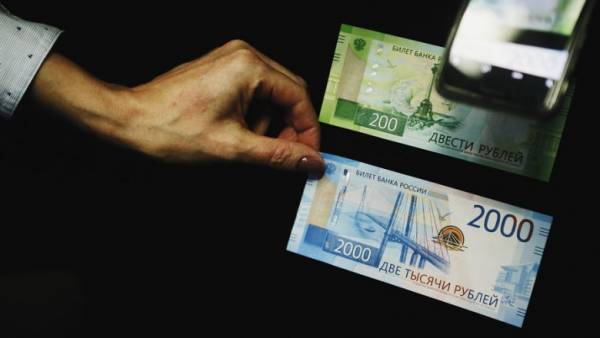 Although the Bank of Russia 12 Oct issued into circulation banknotes of 200 and 2000 rubles, the mass of their input has not yet occurred, and in most regions of the new notes — a rarity than rush to take advantage of speculators.

For several months there is an active resale “Vladivostok-2000” and “Crimea-200” confirmed “Газете.Ru” the Russian Internet sites.

Peak accommodation listings fell in January, according to analysts of the company “Yula”. “Often the Russians are trying to earn money in 2 000 — ad about selling them since October was 3.5 times more than on the sale of the 200-ruble. Most ads on the sale of new notes were created in January. Then, the banknotes of the most active and bought — for this month had 45% of their purchases,” — said in the company.

The most popular among buyers enjoy the banknotes in denomination of 200 rubles. The number of queries the contacts, ads for sale since the launch of banknotes in circulation amounted to 99362. Almost three times less interested in bills in 2000 rubles — 35860 requests of the contacts, said “Газете.Ru” analysts Avito.

The Internet sites assure that the site is allowed to place such ads only for numismatic purposes. However, it is hard to believe that so many people in Russia suddenly became coin collectors. “From October 2017 27 February 2018 in sub-heading of “collectibles” was posted on Avito 2501 the announcement of the sale of banknotes in denomination of 200 rubles, and almost 1387 listings of banknotes 2000 rubles,” — explained in the company.

According to the “ula”, the most expensive 2000-ruble banknotes worth immediately after their release in October. The average resale price in the country then reached 4.4 thousand rubles. In Moscow for one bill requested 4,8 thousand rubles.

In November the average price of new banknotes in the country fell sharply in the quarter to 3.3 thousand rubles. A 2000-ruble bill, asking for an average of 2.6 thousand.

In January, the 200-ruble sold almost twice as expensive — for 390 rubles in Russia. “In Krasnoyarsk the price is reached 1 thousand rubles — five times more than face value. Now the average resale price of a 200-ruble banknote for the country — 378 rubles, — told in the company.

Collectors are always eager to get banknotes of the first edition in perfect condition, not bent nor dirty, in this case the series AA. They now sell. The rest (of the type AB, DV, etc.) are not of interest.Expert in the circle of collectors

The interest of collectors fueled by the fact that new banknotes of such face value not seen since 2006. Exception — gift series to the Sochi Olympics in 2014. Was then printed 100-rublevki two series AA and AA. In addition, in 2015, in honor of joining Crimea to Russia was issued 100-ruble three series — KS, KS and SK, the expert reminded.

There is a certain type of people who tend to be in trend and consider themselves pioneers. They are ready to buy the new notes by double and triple the cost, said the CEO of the company “Mani Fanny” Alexander Shustov.