Stuffing on the topic of drugs in the Russian Embassy in Argentina aim to tarnish the work of the Embassy, said Russian Deputy foreign Minister Sergei Ryabkov. 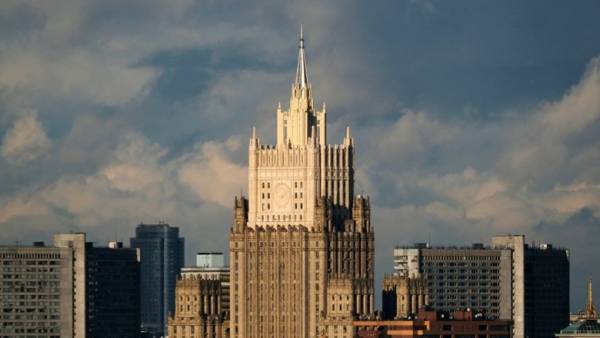 Ryabkov said details of the operation. According to him, the event outline of the case boiled down to the fact that “one of the former, at that time no longer working employees of the technical staff of our Embassy in Buenos Aires left in one of the basement rooms of the school under the Embassy a load, which, he suggested, can be further transported to Russia.”

“As a result shown by the Ambassador and staff of vigilance, was conducted the audit, which revealed the presence in these packages of narcotic substances. Then joined the case to our services, who were in close contact and cooperation with Argentinean colleagues. Then the period of operative-investigative activities. In details I will not go, given the nature of the issue and the fact that it is necessary to continue to ensure strict flow of information in the interests of the investigation and prosecution of the perpetrators,” he said.

“The next step was the so-called controlled delivery, when instead of real goods to Russia were exported dummies. The result measures were taken to neutralize the individuals who are involved,” — said the Deputy Minister.

He stressed that due to the interaction between anti-drug agencies of the Russian Federation and Argentina channel this kind of supply was “not just closed and securely locked, including from the point of view of finding the organizers and executors”.

“Further steps in this area will be carried out in a judicial plane. We received as a result of significant increment of mutual trust and skills of practical cooperation between Moscow and Buenos Aires in one of the most important areas from the point of view of ensuring state security,” Ryabkov concluded.

Earlier, the Minister of security of Argentina Patricia Bullrich reported that the security services of Russia and Argentina prevented the sending to Moscow of 389 kilograms of cocaine was arrested several people, including fellow Argentine police, and a native of Russia. According to the Minister, Embassy of the Russian Federation on 14 Dec 2016 informed the security Ministry about the discovery in one of the premises of the Embassy several suitcases full of cocaine.

The Russian foreign Ministry, in turn, reported that information about the discovery of bags with suspicious content on the initiative of the Ambassador of Russia in Buenos Aires, Victor koronelli and “in coordination with the center” was communicated to the leadership of the Argentine law enforcement agencies.

During a joint RAID by intelligence agencies of the two countries, the cocaine was replaced with flour, in bags were placed GPS trackers, police began intercepting telephone conversations of persons involved in the attempted drug trafficking. The value of the confiscated drugs on the black market is around 50 million euros.

As reported by the Argentine newspaper Clarin, the drugs were in the school building of the Embassy. The media also mentions the names of the detainees are Ivan Bliznyuk, who worked in the police Department of Buenos Aires and has visited Russia for the organization of educational programs with the members of the security services, and Alexander Chica, who worked together with Bliznyuk.

The official representative of Russian foreign Ministry Maria Zakharova on Saturday denied reports by some media that the transportation of drugs from Argentina allegedly illegally used the diplomatic mail. In comments Zakharova, published by the Russian foreign Ministry on its official page in Facebook, it is emphasized that “technical officer (detainee Argentine police in a criminal group — ed.) was not a diplomatic passport, no tolerance to the formation of diplomatic mail”.