Ksenia Sobchak announced the list of businessmen who financed her campaign. Among the sponsors were: the General Director of “Onego Shiping” Alexander Roslyakov, the publisher of Forbes magazine and L’officiel Alexander Fedotov, Trustee of the “Novaya Gazeta” Sergei Adonyev. MS Sobchak said that he named only those who gave consent. She demanded the resignation of the Governor of St. Petersburg Georgy Poltavchenko, saying that the city needs “young and educated” the mayor. On the question of whether she meant herself, Ksenia Sobchak, said that “to speak about it prematurely”. 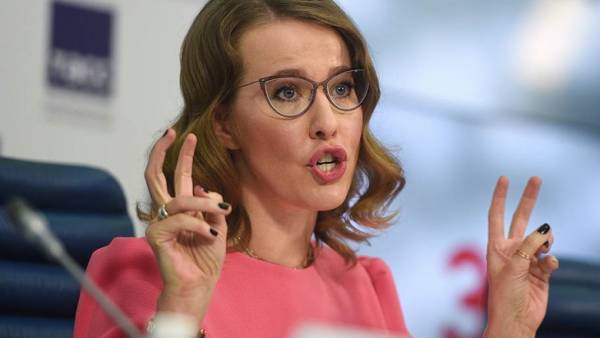 Nominated for the President “Civil initiative” Ksenia Sobchak said that reveals the names of the sponsors of his campaign, who gave consent. “People I will not name, much more than those who got into this list, but they all carry risks and do not want to become the “Dodo pizza” (the chain’s founder Fyodor Ovchinnikov twice questioned as a witness in the case about distribution of drugs through the pizzeria.— “Kommersant”)”, — said Ms. Sobchak. She did not mention the amount she donated, promising to do it later.

First Ksenia Sobchak called the head of the investment Fund Legacy Square Capital Vladimir Palihata. He publishes the Russian version of the magazine on entrepreneurship Inc., previously, he was President of Rosenergomash concern. Called the candidate also the name of the General Director of “Onego Shiping” Alexander Roslyakov. According to Ms. Sobchak, he is engaged in transport transportations, the construction of ports and marine infrastructure projects: “This is the man for whose sake I had to fly to Bali and wipe spilled on himself a bucket of unpleasant substances. Just have the business people who already earn well and half are abroad.”

The list also includes Trustee “Novaya Gazeta” Sergei Adonyev. Ksenia Sobchak said that the envelope with his name she gave during an interview with TV channel “Rain” the head of the Board of Directors of the “New” Dmitry Muratov. Mr. Adoni was one of the founders of a new mobile operator Scartel (Yota). MS Sobchak said that he mistakenly associated with the head of Rostec Sergei Chemezov. “I want to say to those who do not engage in factchecking: he sold the Yota three years ago,” she said. Note that Mr. Adoniou owns a stake in the developer of the smartphone Yota Devices, which produces YotaPhone. The businessman is also the co-owner of the electrotheatre Stanislavsky and co-founder of the Institute of architecture and design “Strelka”.

Friends and sponsors of Madam Sobchak called spouse Vadim and Yana Raskovalova. Mr. Raskovalov entrepreneur and developer, owner of the network of sports clubs SportLife, his wife is a designer and co-owner of the jewelry company. Among the sponsors was the former Deputy Director of the Federal tax police service, the founder of the company “New energy system” Anatoly Tsybulevsky. He supported the candidate “against all” and the owner of Artcom Media (publishes Forbes magazine and L’officiel, the last Madam Sobchak was editor-in-chief) Alexander Fedotov. To the question, do not mind if MS Sobchak, the fact that Forbes, with the arrival of Mr. Fedotov stopped publishing the ratings of Russian top managers, the candidate answered in the negative, although he decried the lack of a rating in a magazine.

Ksenia Sobchak did not rule out his participation in the presidential election of 2024.

Earlier she said she was going along with the “Civil initiative” to participate in elections to the state Duma in 2021. MS Sobchak said that on the basis of their headquarters in the regions after the elections, intends to create “a broad political movement, the form of which to speak while early”. Sources in the headquarters of Ms. Sobchak told “Kommersant” that the representatives of staff on the eve of the presidential elections are scheduled to gather in Moscow to discuss the creation of the party. The head of the regional headquarters Timur Valeev denied this information, noting that a “party line”.

Through its presidential campaign Kseniya Sobchak intends to demand the resignation of the Governor of St. Petersburg Georgy Poltavchenko.

She called “shameful and disgraceful” the transfer of St. Isaac’s Cathedral, Russian Orthodox Church, the prohibition of a March in memory of Boris Nemtsov. “The city needs to manage a young, energetic, educated force. Stop the practice of appointing its friends heads of regions! We believe that the fall in St. Petersburg should be a normal European, the Governor, who will match the interests of the city. That’s my goal,” said the candidate. The powers of the head of St. Petersburg expires in 2019, however, has repeatedly appeared information that he may be sent into early retirement. On the question of whether it is referring to himself as a possible contender for Governor, Ms. Sobchak said that “talking about it is premature”.