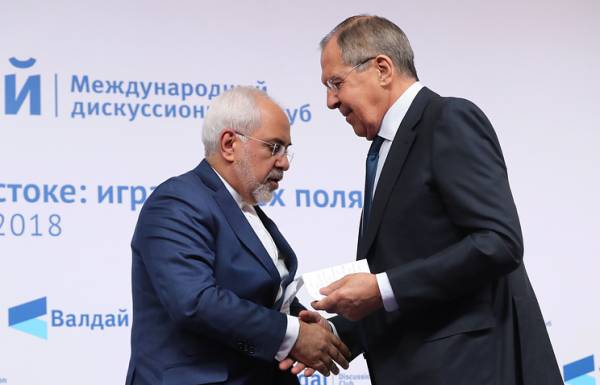 The foreign Ministers of Iran and Russia, Mohammad Javad Zarif and Sergei Lavrov

MOSCOW, February 19. /TASS/. The foreign Ministers of Russia and Iran Sergei Lavrov and Mohammad Javad Zarif held talks Monday to discuss cooperation between the two countries on a wide range of issues, as well as the most “acute” regional stories. This meeting was the second in the just the beginning of 2018, Ministers have met in Moscow on 10 January. Then the center of attention of the heads of depodesta was the situation in Syria and the implementation of the agreement on the Iranian nuclear program. This time, Zarif arrived in the Russian capital to participate in the conference of the international discussion club “Valdai” on the situation in the middle East.

“This meeting showed that the positions of Iran and Russia on many regional issues are very close,” said in this regard, the foreign Minister of Iran.

Zarif is a frequent guest in Russia, and this visit, according to his confession, became the twenty-second. “It shows the depth of strategic relations between Iran and Russia, which still played a very important role in establishing security and stability in our region,” he said.

After talks with his Russian counterpart, the foreign Minister of Iran talked to a waiting press. Seeing that among those gathered in the representatives of the Russian media, Zarif himself invited the translator and, to the surprise of journalists, did not answer the questions of Iranian TV, while the translation was not provided.

The relative calm observed around the situation with the Iranian nuclear programme after its launch in January 2016 Joint comprehensive plan of action (SVPD) in recent months has been disrupted by critics of the agreement and threats to get out of it from Washington. The situation escalated when in October last year, President Donald trump outlined a new, tougher U.S. strategy toward Tehran. The US President also refused to confirm the implementation of the Tehran AGREEMENT and promised to seek changes in the agreement, otherwise the United States will cease to participate. When in January the us President has extended the freeze mode of sanctions against Iran, warned that doing this in last time and only with the goal “to conclude an agreement with European allies in order to correct the horrible deficiencies of the Iranian nuclear deal.”