On Monday, Prime Minister of Latvia Maris Kuchinskis has demanded from the head of the Central Bank of creativity Rimshevicha to resign. So the Republican leadership reacted to the corruption scandal, in which the Office for combating corruption was detained and interrogated the head of the Central Bank on suspicion of concealment of the money laundering one of the Latvian banks. 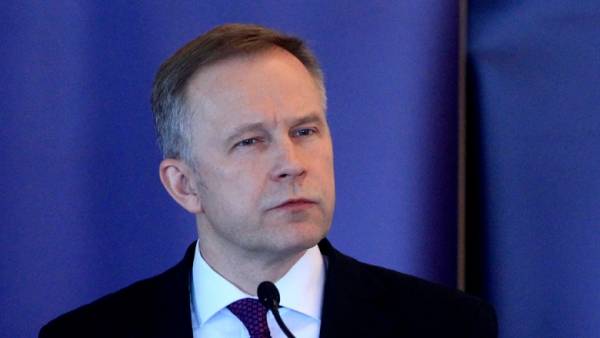 This morning, the top leadership of Latvia for the first time voiced his reaction to a loud corruption scandal, which erupted last weekend. On Saturday, representatives of the Latvian Bureau on prevention and struggle against corruption (bpbc) raided the Central Bank of the country, detained and interrogated the head of creativity Rimshevicha. The interrogation lasted several hours, the financier was released only on Sunday morning. Yesterday, the first reaction came from the Minister of Finance Given Reizniece-Ozola, who called the head of the Central Bank, which by law is an independent body, to leave his post, at least during the investigation.

The official reason for the detention and interrogation of the Governor of the Central Bank were not disclosed, but the Minister of Finance referred to the report of the U.S. Treasury, which refers to large-scale operations, money laundering in the Latvian Bank ABLV, and that the Bank was able to bribe “influential representatives of the local authorities.”

U.S. sues Bank of Latvia in the fact that he spent payments to parties and individuals associated with the DPRK, some of which are involved in the supply of components for ballistic missiles. The relationship between the Bank and the head of the Central Bank, the Minister is not held. Currently the Latvian government is holding an emergency meeting in connection with the corruption scandal in the Central Bank of the country.

In turn, this morning, the chief bpbk jēkabs Straume held a press conference during which he explained that the detention of the President of the Bank of Latvia Ilmars Rimshevicha has nothing to do with the claims of the U.S. Treasury Department for activities of ABLV Bank or the criminal proceedings on extortion of a bribe from Bank Nordik. The arrests have been made in the investigation of criminal case about bribes. Local news Agency Delfi reports that the amount exceeds €100 thousand In criminal proceedings involve two people — the official Bank of Latvia and a person. Bpbc is investigating this case together with Management on struggle against economic crimes of Latvia. Bureau will not insist that the suspects were applied as a preventive measure involving deprivation of liberty.