The press Secretary of the election headquarters of Vladimir Putin, Andrey Kondrashov has told RBC that the main themes of the campaign commercials of Mr. Putin were the integrity and strengthening of the country, improvement of life of citizens and social justice, the further movement of Russia forward, respect traditions, and strengthen the defense. 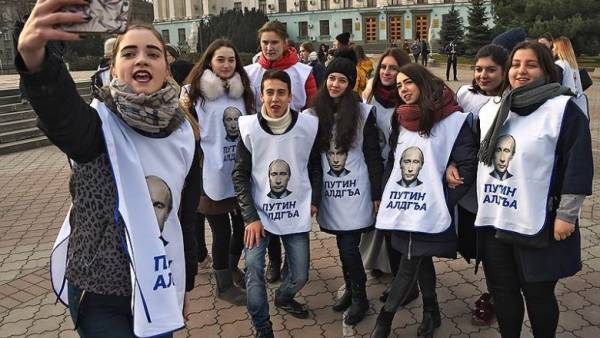 Mr. Kondrashov has explained that these topics are “natural” as acting President “throughout his work was always foremost in these challenges”.

The main slogan of the majority of the commercials will be “a Strong President — a strong Russia”.

“We believe that Russia must be strong, to grow and to make breakthroughs. The lives of citizens can be comfortable only if at the head of our country a strong President”, — explained Andrey Kondrashov.

He noted that Vladimir Putin in the filming of the commercials was not involved, “the special sound of a candidate” were also not conducted. However, according to Mr. Kondrashov in commercials used snippets of public speeches by the President. Also in the video included species survey of Russia and the shooting of large economic objects.

Campaign videos will start showing on TV today. Getperiod in the media started two days ago. Presidential elections will be held on March 18.