Shrove Sunday: how did a tradition before lent

MOSCOW, 18 Jul — RIA Novosti, Sergey Stefanov. The last day before lent, Orthodox Christians call forgiveness Sunday. Long since this day in Russia, believers ask each other for forgiveness and prepare to enter the “Holy and great lent” — the rigorous and continuous fasting. About why there is such a tradition and what other senses have this event in the material RIA Novosti. 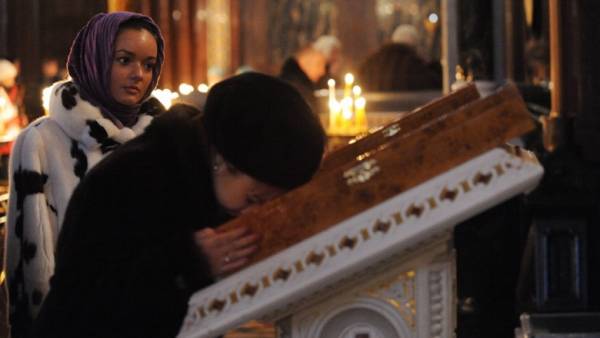 The expulsion of Adam from Paradise

On forgiveness Sunday, the Russian Orthodox Church for worship, “the remembrance of Adam’s exile.”

According to the Bible this event — the expulsion of the first people, Adam and eve from Paradise for disobedience to God — was the beginning of earth’s history.

And as the forefather Adam and then repented for his misdeeds and all believers who in lent, are called to do the same.

The rector of the Church of St Elizabeth in Pokrovsky-Streshnevo, the Metropolitan of Ryazan and Mihajlovsky mark notices that no one in this life is to avoid serious mistakes, which the Church calls sin. And all the people were “true” followers of his ancestor Adam.

“With the arrival of lent we need to start another life, the time has come to mourn had us sins. We repeated the path of Adam in the fall, but we still have to retrace his steps in repentance. And opening before us the period of lent helps us do that,” says Bishop.

According to him, the word “repentance” some get the idea that it is “continuous negative emotions” and the opposite of what is meant by a meaningful life. However, in reality only the first stage of repentance — repentance may be associated with negative experiences. Full repentance fills the soul with joy and frees people from internal conflicts that generate sin.

It is believed that God’s first commandment that was broken by Adam and eve, was the prohibition “to taste” the fruit of one specific tree God — “the tree of knowledge of good and evil.” And to be reconciled to God, man again have to go through the post. However, now is abstinence much more stringent.

Forgiveness Sunday in all Orthodox churches, they read a passage from the Gospels with the words of the Savior: “If ye will not forgive men their trespasses, neither will your Father which is in heaven forgive your trespasses”. It is a prerequisite for the entry of a person in a post, without which even a total abstinence from food would be considered, legally speaking is invalid: God will not accept it.

Embodying this call to forgiveness, the churches and monasteries serve Vespers with a special “rite of forgiveness”. The priests read a prayer, asking God blessings to all for the upcoming long post (in addition to the 40 days of lent is still followed by the Passionate “week”, week). Then, by tradition, the clergy asks for forgiveness from all gathered in the Church, and the laity — the clergy and each other.

“I’m sorry” and “I forgive you” they say during the day and to all my family and friends, which is something molested or which themselves hold a grudge.

Of course, the words can be different, the main thing — the spirit of reconciliation. Apologize for their misdeeds, “voluntary or involuntary” in front of everybody and the Patriarch, after the evening service in the Cathedral of Christ the Savior.

The rite of forgiveness takes its beginning in Palestinian and Egyptian monasteries of V—VI centuries. cow, when on the eve of Great lent the monks for 40 days went to the desert to devote all his time to prayer and preparation for Easter.

“Some of them did not come back: someone died from old age, someone was able to grasp the misery in the harsh desolate wasteland, says brethren of the Sretensky monastery hieromonk Irinej (Pikovsky). Because leave, hermits, as before his death, asked each other for forgiveness for all the intentional or unintentional insults. And of course, heartily forgave all. Everyone knew that their farewell to each other on the eve of Great lent could be the last. In order and there were present the rite of forgiveness — to be reconciled with all people and because of this, God.”