Federal service of execution of punishments of Russia appealed to the spiritual administration of Muslims for help in work with convicted members of radical sects of Islam, which are increasing in number. This increase in the Agency associated with a large number of prisoners from the countries of Central Asia. Experts of Department together with the clergy will begin with an analysis of directions of Islam, which adhere to the convicts. 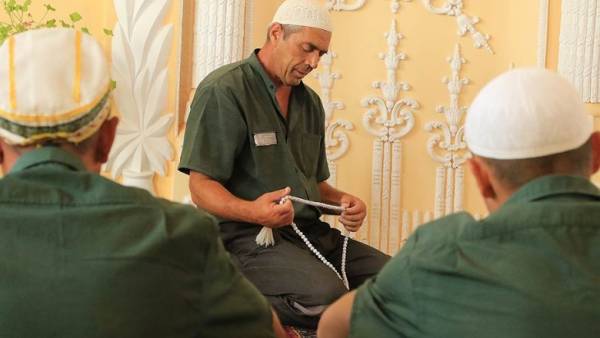 Deputy Director of the Federal penitentiary service of Russia Anatoly Rudy ordered to find out what Islam is professed by the convicts in Russian penitentiaries. “The goal is to analyze who we are, including convicted under articles “terrorism” and “extremism”, and if necessary, to seek the assistance of imams to clarify which of course these people profess and how we act correctly with this category of convicted persons”, — he said at a round table in the office on 15 February.

Mr. Rudy outlined the problem — “aggressive Islam, which come to us from abroad”. According to him, now in the Russian colonies are 29 prisoners from Uzbekistan, Tajikistan and Kyrgyzstan, and their number may increase due to labour migration.

“There’s plenty of other sects of Islam that are beginning aggressively to influence the internal situation in places of deprivation of freedom, — said Mr. Rudy.— We have no green areas (i.e. correctional institutions, informally controlled by the Muslims.— “Kommersant”), but attempts to create a separate JAMA’ats (congregations.— “B”) is”. He said that in one of the colonies, where half the convicts were natives of republics of Central Asia, the riots took place. According to the Deputy Director of the Federal penitentiary service, the religious community denied “obscuring subculture” and no negotiations have not led to success, eventually had to take “active actions” force solution to the problem.

“We have fascists, nationalists, we are able to work with them. But people who advocate an aggressive form of Islam, to the end not able to work,” admitted Mr. Rudy.

“When we talk about traditional Islam, we mean the four madhhabs (schools of Sharia law in Islam.— “Kommersant”), — reminded the responsible for the prison service of the Central spiritual administration of Muslims of Russia (tsdum), the Imam-Khatib Arthur Ahmerov.— But in General we have two madhhabs: the North Caucasus is a Shafi’i, and the Urals and the Volga region, Central Russia — Hanafi”. He asked the Muslims “to agree and make a plan of action.” “You tried to convey to us the important idea that in Russia there are not only Sunnis but also Shiites — appealed to the Deputy Director of the Federal penitentiary service researcher, Institute of Oriental studies Samil Kashaf.— I hope that representatives of these hear it, too”. Director of the Center for social rehabilitation and adaptation in Kazan Azat Gainutdinov suggested not to delve into the differences of the currents, and to talk to people about morals and love of country.

The head of the Center for the study of religion and society Institute, RAS Roman Lunkin said “Kommersant” that the issue of Jamaat, including in prisons, appeared in 2000-ies, with the adoption of the law “On countering extremist activities”.

After this part of Muslim books was called extremist, not every decision of the Russian Muslims agree. “The Federal penitentiary service need to understand that the Muslim clergy of Russia also belong to different areas. There are spiritual management, who are not ready to call of the Salafis and Wahhabi extremists. In the end, in the colonies, the representatives of one direction may be dissatisfied with the communication with the Imam, preaching another. Probably such conflicts FSIN also fears,” said Mr. Lunkin. He explained that the solution could be the active work of the parties: “the Federal penitentiary service need to understand the specifics of what is happening, especially currents, and the spiritual offices it is necessary to prepare specialists who have worked in prisons with prisoners”.