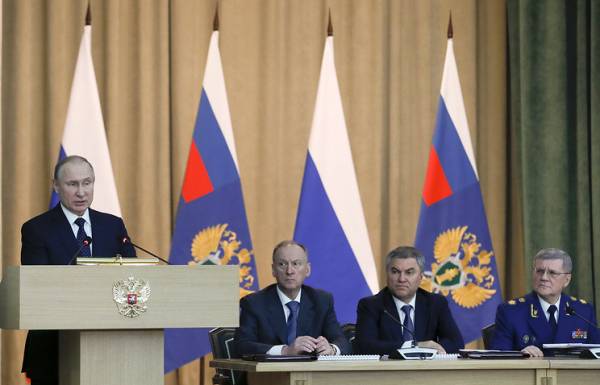 MOSCOW, February 15. /TASS./ The fight against corruption in Russia will receive the necessary political support, said Russian President Vladimir Putin on Thursday at the expanded Board of the Prosecutor General. He stressed that this direction must act with “utmost decisiveness”.

The head of state demanded that the Prosecutor General’s office to respond immediately to delays in the payment of wages and other violations of labor and social rights of citizens. He called one of the key objectives of the controls in place over pricing in the sphere of housing and communal services.

The President proposed to consider the decriminalization of several economic crimes and pointed to the need to prevent any attempts of pressure on business.

Addressing the meeting, Russian Prosecutor General Yuri Chaika has summed up results of activity in the past year and told about plans for the coming period, highlighting such areas as the fight against corruption and anti-terrorist activities.

Against corruption at all levels

“I want to pay special attention to the task of strengthening of work in such a direction as to combat corruption. We constantly say this, but from the agenda this question is, unfortunately, not removed”, – stated Putin, addressing the participants of the meeting. “We need to act decisively as possible. This work of law enforcement agencies will receive the necessary political support,” the President said. “And I’m sure I can rely on solidarity, a consolidated position of Russian citizens”, – he added.