In Omsk trying to unravel the causes of “Irtysh anomalies”. 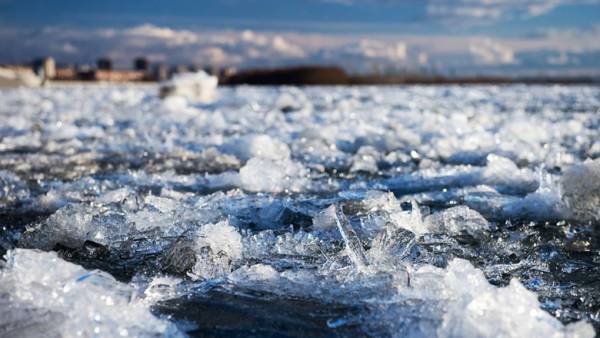 On Friday, February 9, diver Omsk emergency services in ten degrees below zero sank to the bottom of the Irtysh. He wasn’t looking for a missing person, not trying to get off the bridge the car and not even carried out the procedure of hardening. It is the residents of Omsk has demanded from city authorities to explain the reasons for the city’s second consecutive year does not freeze the river, and succeeded.

Why the city is called wormwood Irtysh abnormality, as it has become a tool in the struggle for the environment and what secrets are hidden on the river bottom, out the portal iz.ru.

“Irtysh soars”, “Irtysh boils,” with such signatures of residents of Omsk since the beginning of winter spread in social networks photos and video, which really shows how over the great Siberian river in the dead of winter steam rises thick.

One of the first such meditation video, which in frosty silence, broken only by the hum of the wind, within half a minute you can watch the white clubs, dancing over the open water, posted by a local activist Basir Manatoulin. “On the ice of the Irtysh river is now dangerous to walk”, he warned.

Even this video is enough to understand that the area of the hole is really impressive. But no official statements from local authorities, according Omsk media, at that time was not done. As it was not installed and a warning fence around it.

Why is it important?

Irtysh freezes every year, and the thickness of its ice is in most cases enough to lay him on the ice crossing for vehicles, including heavy. And if in the Omsk, there are bridges, many villages located in areas such ice roads are the main transport artery: with their help you can quickly get to the hospital to deliver products to the village or just in time to get to work. If the hole in the ice will begin to form on other areas of the Irtysh — it is not clear what will become of these crossings.

Another polynya, for example, that winter until February, were not allowed to work ice crossing near the villages of Aksenovo and Yarkovo. However, with the advent Epiphany frosts it still froze. But Omsk no.

The river at this point of the city, at the Leningrad bridge does not freeze for the second year in a row. Residents of the city say had never happened.

In length it reaches almost a kilometer, besides soon the city found another hole, not far from the local television station.

The scientists say the hole in the ice is already affecting the river’s ecosystem. For example, some ducks, despite the cold, refused to fly away for the winter. In addition, it is downright dangerous. Last year, for example, the hole missing 22-year-old student. Water’s edge volunteers who participated in the search, found her hat. The body of the girl found only a month later when it washed ashore.

To draw attention to the problem of urban activists have created a special website which contains all the information about the Omsk ice. On the website under the catchy name “the Bottom” (there is, however, depicted a beautiful dive to the bottom of the river) noted, for example, that in the city there are problems with the environment.

Since the beginning of January theories about the origin of the hole it was a lot. Sam Basir Manatoulin in a conversation with journalists at first speculated that the reason could be the melting of water in the swamps of the warmer winter days. But this version refused after the ice began to freeze even with the onset of the present Siberian frosts. In addition, Manatoulin noted that the reason could be rotten sewer underwater pipeline laid on the bottom of the river.

In the short list of the most discussed reasons for in the end became unaccounted for pipe that could be laid on the bottom of the Irtysh river, illegal dumping of chemicals, peculiarities and even the influence of the bridge abutments. Most of the residents adhere to the version about the problems with the environment.

Activists even remember the story directed for the disposal of radioactive waste, lost in the territory of Omsk region.

Then it turned out that a local company Merck for several years, participated in tenders for the disposal of non-hazardous waste without the necessary equipment: appropriate license was obtained illegally.

In December 2017 the head of the company Dmitry Zolotarev was convicted. But where it happened to 3 tons of toxic waste originating from the Nizhny Novgorod region, which began the environmental scandal, to find out and failed. However, no indication that the Irtysh anomaly can be associated with them, still also was found.

The odorizer of household gas

According to reports in the local media, the ice time has exposed not only the water of the Irtysh river, and numerous questions to the state of the environment in the city that managed to accumulate in Omsk.

At the beginning of February, when the debate about the strange behavior of the river was in full swing, the residents complained about a strong chemical odor in the air. Then in Omsk fixed excess of maximum permissible concentration of nitric oxide. The way I remembered that a similar situation was observed in March 2017 — while also revealed that the concentration of harmful substances in the air exceeded, only it was about the ethyl mercaptan. This is the odorant that is responsible for disturbing the usual “smell of gas” and therefore to be mistaken with his identity townsfolk quite difficult.

Ethyl mercaptan is toxic, it belongs to highly toxic substances — although it is harmless in small quantities, in which there is domestic gas that in large doses it can cause nausea, headaches, and also affect the kidneys and liver.

However, the Professor of Omsk state agrarian University Olga Bazhenova stated that the odor is likely were of natural origin.

“I believe that the smell of mercaptan formed due to photochemical smog. The sun was shining, was emissions from the different companies and vehicles. To one company covered its emissions Omsk, this can not be. And the smell of ethyl mercaptan was recorded in different parts of the city”, — quotes its words Omsk website БК55.

In addition, in January 2018, the Prosecutor’s office found that in the wastewater that enter the river Irtysh near the ice-hole, four times exceeded the maximum permissible concentration of salts of ammonia water was supplied to the river from storm water, but now he was cold due to the frost. The local Ministry of natural resources insist that the measurements were carried out at the pipe, and in the Irtysh indicators are several times lower.

Rallied around polynyas residents quickly managed to attract the attention of the authorities. To establish the reason why the water refused to freeze, instructed the acting Governor Alexander Burkov. Rosprirodnadzor, according to TASS, immediately filed three administrative proceedings under the article “Violation of rules of protection of water objects”.

February 7 issue of the polynya discussed at the highest level — in Omsk held a special roundtable in which he participated acting head of the regional Ministry of natural resources and ecology Alexander Matnenko, environmental experts and even divers. While officials insist that the reason is not in harmful emissions.

Roshydromet regularly takes samples at five points of Omsk, and their chemical analysis showed nothing. No chemical pollution of the Irtysh river, which could affect the appearance of the polynya.Alexander Matnenko

Responding to a question about whether on the river bottom to be forgotten by sewers, he, however, has already expressed a less categorical, admitting that there is such a possibility, but it is “quite low”.

Alternatively, the leadership of the Ministry of environment has put forward own version of the ice — hole was formed due to the characteristics of the flow: the turbulence caused by irregularities or the bottom, or the supports of a nearby bridge.

Alexander Matnenko in confirmation of his words, even expressed a willingness to swim in the ice-hole. But in the end the dive was near the divers (now air temperature in Omsk — from minus 10 to minus 15 degrees Celsius). They surveyed a bottom of Irtysh near polynyas on 9 February. We also invited local journalists. A special bus brought them to the river — however, it turned out that the ice actually is a penalty, so the ice would not let them. During the dive the diver they watched from the sidelines.

Wait reporters had long. A diver of the rescue service of the Omsk region Alexander Firsov had been under water for a few minutes. And rising, he told reporters that the move failed because of the difficult conditions, at the same time, according to him, the ice thickness at the edges of the hole is 15 cm, then there is a problem has a distinct local character.

In this place the conditions are very difficult. Strong current, zero visibility, cold water. Fully to examine all failed. What I examined the sandy bottom. Alexander Firstport “City 55»

This means that the version of the Ministry of natural resources about bumps on the bottom that lead to “turbulence flow” is not confirmed yet. However, Firsov recognized that a strong current, colliding with the pillars of the bridge, can really lead to some turbulence. He believes that the most effective way to learn the truth is after the ice melts to study the bottom topography with a locator.

8 February, immediately after the roundtable, the regional Ministry of natural resources has opened a hotline on which citizens can complain about the environmental situation. As told by the employees of the Ministry of TASS, this will allow to obtain data on the exact time of occurrence of odor, and also about the areas of complaints. Perhaps it will be easier to track the sources of emissions. Activists say that find enterprise-pests, if any, the city has no emissions into the air almost impossible. But in the case of water pollution to calculate the culprits will be much easier.

“I remember — when was the noise from the ethyl mercaptan, I immediately said that the culprit will not find, because it’s the air. In the air hard to catch. Water is a completely different environment, you can accurately track, moving in the stream, where there is what appears. It’s easy,” — told reporters one of the activists, blogger Sergey Kostarev.

However, this is unlikely to be able to do until the spring. While wormwood “to determine” shielded warning signs.

Characteristically, at the end of 2017 one of the local residents submitted on the city perfume “No. 55”. As follows from the description, their scent is “a persistent Association with pine trees, warmed by the hot sun of the steppe, wormwood, old willows, which are famous in Omsk, open spaces to the horizon and a little railway”. And not a word about the ethyl mercaptan, or nitrogen oxide. Importantly, the author did not have to adjust this romantic bouquet due to the deterioration of the environmental situation.