Russian nationalism: without a party, but in criminal cases

For almost six years, the liberalization of party building nationalists in Russia did not manage to register their own political party. 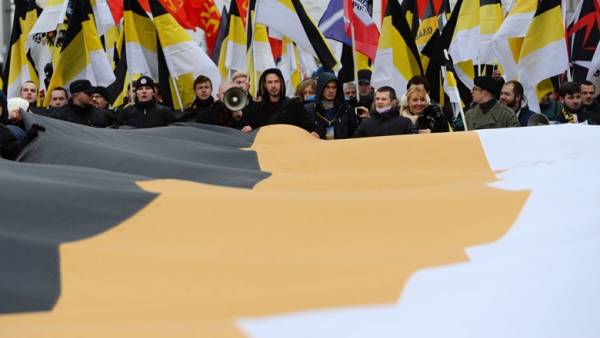 Back in April 2012 as President of the country Dmitry Medvedev has approved amendments to the law on political parties, in particular reducing the required number of participants — from 50 thousand to 500 for the registration of the party. This liberalization was used by dozens of political parties: new democratic, Communist, agrarian, and even one of the Cossack party. Perhaps the only power that liberalization has given nothing, were nationalists. “Party of nationalists”, “National democratic party”, “Liberal party “national Russia” made a lot of attempts to register at the Ministry of justice, and each time to no avail.

Experts believe that the failure of the nationalists there are two main reasons.

The first relates to the nationalists themselves. In the 90-ies of the last century they were popular, largely due to their radical ideas. For the most part they remain faithful to those ideas and now that confirmed the denial of registration of parties. Time and again its refusal, the Ministry of justice explained the contradictions provided by the party statutes of the Russian Constitution.

The second reason is the actions of the authorities, who for 2000 years have washed the support of the nationalists in society. In the 90 years to appear in the nationalist organizations was the escape from weak States. In 2000 years about the weak state called Russia, however. There is no longer the mass non-payment of wages, unemployment and other problems. As there is no image of the Russian people, which runs from CIS countries to Russia. But there is the return of the Crimea, attempts to formulate the idea of the Russian nation of different peoples and the state youth policy.

“Russian people is the bearer of positive Imperial consciousness and this is why nationalism will never take root. An attempt to introduce nationalism in the mid-90s — is an attempt of weakening or elimination of the Russian statehood. Thus, positive political nationalism can not exist. I mean a legitimate opposition system. That is, not the existence or Russian, or Tatar or Bashkir nationalist parties. They can be marginalized groups, but in terms of a strong state can not develop. That is why the forces that were still in 90-e years have become obsolete, and replaced them no one came”, — said the analyst Artur Ataev.

Only in Moscow in 1990-e years, there were several right-wing organizations, comprised of thousands of people.

Once the most popular of the nationalist organization “Russian national unity” (banned organisation) of Alexander Barkashov, there were hundreds of branches in different cities of Russia.

He, Barkashov, in 1999, registers for participation in the Duma elections, the movement “Spas”, which the authorities regained consciousness, only after a court ban to try their hand in the fight against the Communist party or “Unity.”

In 2000-e years the interest to the nationalists fall, but you cannot say that they will eventually go down in history. On the one hand, there are such organizations as the “BORN” (Battle organization of Russian nationalists, whose members participated in the murder of lawyer Stanislav Markelov and journalist Anastasia Baburova) and the DPNI (Movement against illegal immigration) Alexander Belov, which through mass media tries to convey their views. Later, together with Dmitriy Demushkin Belov creates the movement “Russians”. But in the end BOURNE, DPNI and “Russian” are recognized as extremist organizations whose activities are banned in Russia.

At different times and for different crimes in prison are Alexander Belov and Dmitry Demushkin, and the radicals of BOURNE. At the same time, still being at large, Demushkin went to party building and tried with colleagues to register the “Party of nationalists”.

No party, its site — Ruspart.org — blocked by the authorities, as well as the page “Vkontakte” leaders of failed organizations Ivan Beletsky and Dmitry Demushkin.

Ekaterina Guryanova in 2012 tried to register with the Ministry of justice of the “Liberal party “national Russia”. Alexander Belov then gave compliments about the leadership qualities of Gur’yanovoy, but the party was not registered, and since then, takes us back to the topic did not come back.

“Since 1991 failed to create a party of nationalists, because nationalists includes a wide range of people: the monarchists, conservatives, left-wing and right-wing patriots, virtually all political ideologies can be based on a nationalist Outlook. Have propitiations forces in modern Russia is very serious electoral potential — more than half of the country’s citizens share the slogans of love for his Homeland, his people,” said she, “the Storm”.