The defence Ministry does not recommend to use social networks and publish online information about their service. 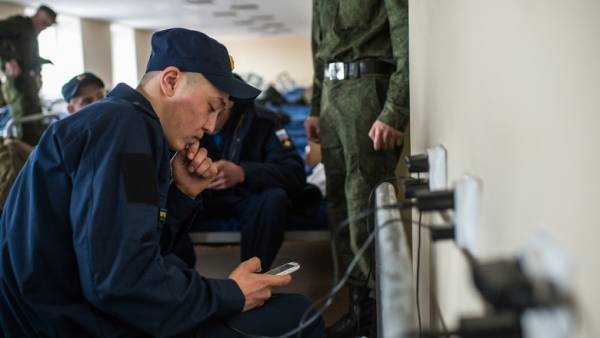 The military restrict access to the Internet. The Ministry of defence of the Russian Federation issued recommendations for the conduct of Agency officers and military personnel in the world wide web.

Soldiers and officers are advised to refuse the use of social networks “Classmates”, “Vkontakte”, Facebook and other similar resources. And also not to publish information about his service and parts, and off in the phones geolocation.

While the rules of conduct are Advisory in nature, but the Department is preparing amendments to laws that make them mandatory.

The Ministry of defence “news” said that the rules of behavior on the Internet was developed in the end of 2017. The recommendations sent to the troops. For convenience they are made in the form of memos, and visual AIDS-posters.

Tips with regard to the retention of classified information and safe behavior of military personnel in social networks (the document is available at the disposal of “Izvestia”). Soldiers and officers are informed that the administrators of foreign resources have full access to your personal information.

The authors of the document remind that the publication of military personnel are constantly analyzed by foreign intelligence services. Therefore, geotagged photos and videos can “lead to the disruption of combat missions”.

Military advised to ask their relatives and friends not to spread information about their service activities.

The defence Ministry is preparing amendments to the laws “On military duty and military service” and “On status of servicemen”. Now they are in the stage of negotiation in the power ministries. Amendments to ban the soldiers and officers give their departmental affiliation, the details of the activity — both your own and colleagues. The guilty soldier can be subject to criminal or disciplinary responsibility.

The soldiers, officers and employees of the Department are reminded that the leaked photos, videos, notes, and comments cannot be removed. Also urge not to forget that publication, inciting ethnic or religious hatred, capable of inflicting “significant reputational damage to the Armed forces”, may incur administrative, disciplinary or criminal liability. Military advised to make their accounts in social networks closed and not to add unknown users. In a memo paid attention to the technical side of Internet security. Suggest regularly update the app and don’t install suspicious programs. Military personnel is recommended for each site or Internet service to come up with a unique password. Used for this combination of characters must be long and complex.

Advisor to the President of Russia on the Internet German Klimenko told “Izvestia” that this manual is primarily for soldiers — that they did not get into trouble.

The army is a special structure where privacy. We know the story of how with the help of various services to find out where there are sentries of the us army. Therefore, the recommendations for the use of mobile phones, smartphones and other gadgets needed. Especially in sensitive parts.Herman Comencement of the President of Russia on the Internet

The author of the book “Social networking: new technologies control the world” Maria Fil told “Izvestia” that the memo drafted correctly and carefully.

— Recommendations do not restrict the personal freedom of the servicemen, only warn them about possible negative consequences of online activity, — said Maria Fil. — An important emphasis on the fact that any information released to the Internet stays there forever.

In foreign countries have long engaged in the conduct of military personnel in the Internet. The Pentagon has published the relevant rules in 2011. They say about the importance of social networks for the military, the importance of maintaining confidential information when dealing and proper positioning of the army in the virtual world.