The interior Ministry of Ukraine reported details of detention of ex-President of Georgia and leader of the “movement of new forces” of Mikhail Saakashvili. 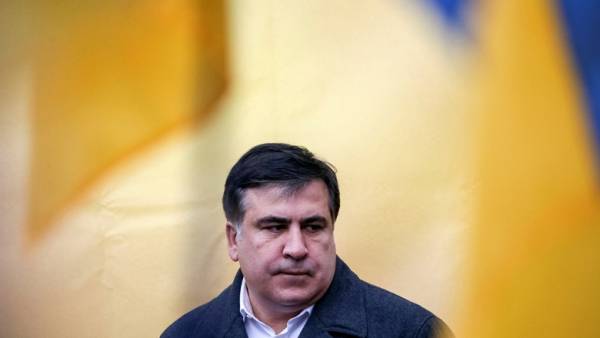 “When conducting coordinated interdepartmental working off in one of the establishments, law enforcement officers found the person without citizenship, Saakashvili N. M. Against him at the request of GMS (the state migration service — if), the Polish side agreed on readmission”, — says the website of the Ministry of internal Affairs of Ukraine.

The interior Ministry indicate that territorial authority of the migration service took the rejection of Saakashvili’s recognition of the refugee or person in need of complementary protection, and the decision was ruled legal in the courts. In this regard, the Department believes that Saakashvili has lost legitimate grounds for further stay in Ukraine.

“For the purpose of implementation of bilateral international Agreements on readmission of persons Saakashvili, mn. transferred to the Polish side,” — said the interior Ministry.

The interior Ministry recalled that on 22 September 2017 Mostyska district court of Lviv region declared Saakashvili, guilty of illegally crossing the border of Ukraine.

3 January 2018, the District administrative court of Kyiv has denied Saakashvili’s claim to the management of GMS in the Kiev region because of the refusal to grant him the status of person in need of complementary protection. On 5 February the Kyiv appeal administrative court (KAAS) confirmed this decision, but on 6 February, Saakashvili has submitted the cassation on the decision of the CAAS to appeal to the administrative court. Attorney R. Chernolutsky stressed that until the completion of all trials related to the status of Saakashvili, the government has no grounds for his extradition or expulsion from the Ukraine.

Furthermore, on 16 February, the Supreme court of Ukraine Cassation administrative court will continue to consider the claim of Saakashvili to the President of Petro Poroshenko about the illegality of the deprivation of the former President of Georgia, citizenship of Ukraine in the summer of 2017.

In the afternoon of 12 February, Saakashvili, was detained in the restaurant “Suluguni” in the center of Kiev near the office of his party “movement new forces,” and then delivered to the airport “Borispol” and sent by plane to Poland.