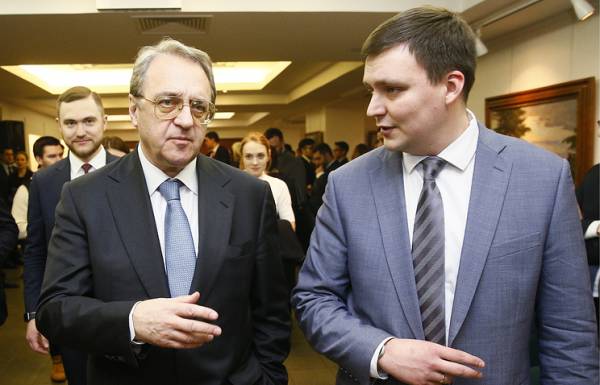 MOSCOW, February 8. /TASS./ The members of the Council of young diplomats was held Thursday at the cultural center of the Main Directorate for servicing the diplomatic corps at the foreign Ministry gala evening on the eve of their professional holiday – diplomatic worker’s Day (February 10).

In the event, which included both formal and cultural center, was attended by special representative of the President of Russia on the Middle East and Africa, Deputy foreign Minister Mikhail Bogdanov, Chairman of the Duma Committee on international Affairs Leonid Slutsky, as well as young diplomats from various countries, including the United States.

During the official part the representatives of the Council of young diplomats summed up the results of their work for the year 2017, focusing on the past in October last year in Sochi, the Global forum of young diplomats.

As stated in his speech, Bogdanov, in the current “turbulent situation in world Affairs” meetings of young diplomats in international Affairs are of particular importance. “They promote the exchange of experience, strengthen trust and understanding between peoples, – said the Deputy Minister. – Therefore, the Council of young diplomats is an especially popular public structure in the Ministry of foreign Affairs of Russia”.