Russia’s envoy to the UN called illegal presence in Syria, the coalition headed by the USA

Moscow. 9 Feb. INTERFAX.RU — Russia in closed consultations of the UN Security Council on Syria reminded the American colleagues that the U.S.-led coalition against ISIS (banned in Russia) is in Syria illegally, said Russia’s permanent representative at the world organization Vasily sebenza. 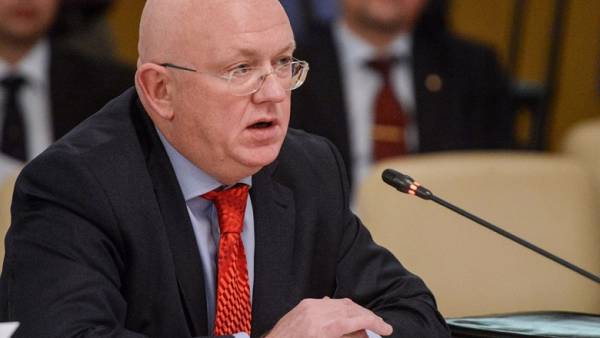 “I asked them to remember that they are in Syria illegally. They had not been invited, they always say that there are fighting against international terrorism, but we see that they go beyond that. Confront those who are really struggling with international terrorism on the ground from the Syrian side, is a crime,” he told reporters after a closed-door meeting of the UN security Council.

Consultations of the UN security Council on the humanitarian situation in Syria took place on Thursday at the initiative of Kuwait and Sweden.

Earlier Thursday, the Central command of the armed forces of the United States said that the Western coalition struck back after the headquarters of the “Syrian democratic forces” were attacked by Pro-government forces in Syria.

“Syrian Pro-government forces initiated an unprovoked attack on the headquarters of the “Syrian democratic forces” 7 Feb. The soldiers of the coalition were to act as advisers, assistants and attendants of the forces, together with partners SDF during the attack, eight kilometers to the East of the agreed line of conflict prevention on the Euphrates river,” said U.S. officials.