Scientists have otsenival the genome of the oldest of the British. He was blue-eyed and dark-skinned

Genetics of natural history Museum and University College London have otsenival genome the oldest Briton, according to a press release on the website of the Museum. 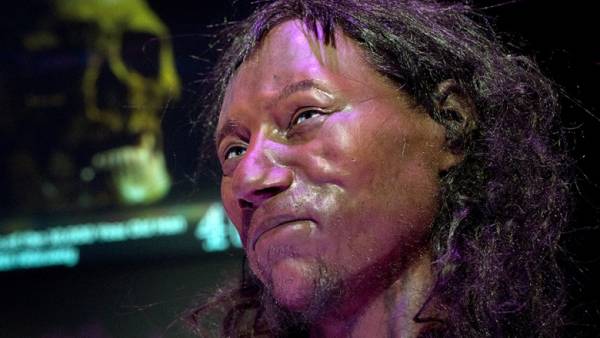 Then, specialists in the creation of paleontological models brothers Kendisi (Alfons and Adrie Kennis) reconstructed his appearance, given the genetic data. The man who lived over nine thousand years ago, had blue eyes and dark skin, like the modern inhabitants of tropical Africa.

Almost the complete skeleton of Cheddar man found in Cheddar gorge in the South-East of England in 1903. The man lived about 9150 years ago and died at the age of from twenty to thirty years. Judging from a fractured skull — a violent death. Today it is the oldest human remains found in the UK.

The skeleton is stored in the natural history Museum in London. In 1996, scientists have otsenival his mitochondrial DNA (passed through the maternal line) and took Cheddar man to the mitochondrial haplogroup U5, which was found about 10 percent of modern Europeans. Presumably, a tribe of hunter-gatherers of Cheddar man’s migrated to the British Isles after the glacial period — at that time Britain was connected to the mainland by an isthmus. In addition to genetic studies, the researchers then reconstructed the appearance of a young man and presented his light-skinned, dark-haired and brown-eyed.

The authors of the new study were able to otsenivat nuclear genome of Cheddar man. They drilled a small hole in the skull and extracted the DNA from bone tissue.

The results showed that, like other Europeans of that time, the oldest British did not assimilate the milk, the gene for lactose tolerance has not yet had. It also appeared that he had light eyes, dark skin and hair.

These results surprised researchers. “Until now it was believed that after coming to Europe about 45 thousand years ago, people adapted quickly and got light skin,” explains Dr. Tom Booth (Tom Booth) from the Museum of natural history. “Light skin is better at absorbing ultraviolet radiation and helps people living in conditions of lack of sunlight to avoid vitamin D deficiency”. However, genetic markers of skin pigmentation from Cheddar man correspond to those that today are found among residents of sub-Saharan Africa (apparently, we are talking about the gene melanocortin 1 receptor, MC1R. This enzyme, in particular, initiates the production of the dark pigment eumelanin).

It seems that the Europeans have light eyes appeared long before light skin and hair. They ancient people acquired after the transition to farming.Tom Booth

Researchers believe that a tribe of hunter-gatherers, which belonged to Cheddar man, was one of the first who settled in the British Isles after the ice age. Judging by finds of the same time in other parts of the island, the Mesolithic people who lived 9-10 million years ago, ate fruits and nuts and hunted quite large animals — wild bulls and deer. They knew how to make jewelry from semiprecious stones and amber, and deer skulls produced bowl (or, perhaps, they were worn instead of helmets). They also buried their dead: in one of the caves in Cheddar gorge were found the remains of 50 people buried within 100-200 years.