The father of Colonel Zakharchenko returned to evidence salary

The TFR has completed the case of an especially large embezzlement. 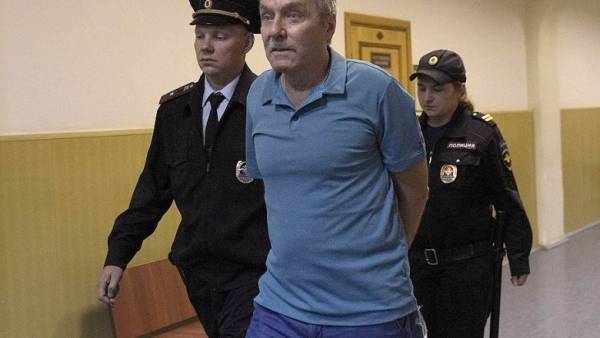 Yesterday, the TFR was charged with the final edition father of the notorious Colonel of the Ministry of internal Affairs of Dmitry Zakharchenko, Viktor Zakharchenko and former Chairman of the Bank “Moscow mortgage Agency” (MIA), Vladimir Korovkin. At the time the financier took Viktor Zakharchenko to his Bank to work, assigning him a salary of 150 thousand rubles, which the investigation considered a veiled bribe the Colonel. In the end, the defendants in this case was charged with an especially large embezzlement. Damage caused by Zakharchenko-the senior, the result was estimated at 4 million rubles. and a banker to 1.5 million rubles, as Mr. Korovkin left the Bank shortly after the father of a policeman was enlisted.

The fact of the charge in the final edition Viktor Zakharchenko and Vladimir Korovkine “Kommersant” have confirmed their lawyers Denis Kalinin and Vyacheslav Leontev. However, Mr. Kalinin has refused comments, having referred to a subscription about nondisclosure. In turn, the lawyer Leontiev said that the defendants are still charged with part 4 of article 160 of the RF criminal code (embezzlement in especially large size). “Today the investigator said the amount of embezzlement, telling me and my client Korovkina that it is 1.5 million rubles, told “Kommersant” Mr. Leontyev.— The money was paid to the Victor Zakharchenko from September 2014 to April 2015, when Vladimir Korovkin held in MIA Bank the position of Chairman of the Board. Then my client went to work in another Bank and his position was taken up by Sergey Grib (listed as wanted.— “Kommersant”), which Viktor Zakharchenko worked as an assistant until September of 2016, when he was fired after the arrest of his son Dmitry”.

Lawyer Leontyev also said that his client Vladimir Korovkin not guilty. “He still insists that he appointed in 2014, Viktor Zakharchenko Deputy not on its own initiative, and as directed by the representative of the founder — member of the Department of city property of Moscow Gleb Bondarenko, who is now a witness in the case,” said Mr Leontyev.

Note that the other defendant Viktor Zakharchenko not only pleaded guilty but also compensate the damage caused.

Now, after the signing of the Protocol on the completion of investigative acts, the case file will be forwarded to the accused and their counsel for review, and at the end of this procedure to the Prosecutor to approve the indictment.

As previously reported by “Kommersant”, the case against Zakharchenko Sr., Victor Korovkina and Sergei Grib was initiated GSU SKR March 30, 2016 on the fact of embezzlement of funds MIA-Bank, wholly owned by the Department of city property of Moscow. The investigation revealed that in 2014, holding the position of Chairman of the Board of the credit institution, Vladimir Korovkin appointed his adviser, Viktor Zakharchenko. He was set the salary of 150 thousand rubles., although a new Advisor who has worked previously for 30 years as a school teacher, had neither the necessary education nor experience in the banking sector. That is why the investigation regarded the appointment as a disguised bribe for patronage, intended for the Colonel of the Ministry of internal Affairs Dmitry Zakharchenko.

After April 2015, Vladimir Korovkin went to work at the BBR-Bank, Viktor Zakharchenko continued to work and receive money in MIA Bank and the new Chairman of the Board Sergei Grib. Thus he illegally obtained, according to estimates of the investigation, about 4 million rubles.

Note that the case of Viktor Zakharchenko and Vladimir Korovkin, quite possibly, will be considered in court together with another in respect of the Colonel Dmitry Zakharchenko. We will remind, the investigation against the last of the TFR was completed in mid-December last year, a wise senior will need much less time to get acquainted with the materials of the case, since it only one episode, while his son — three.