“The doctor not to tie the hands of fear»

Doctors are demanding a revision of the criminal case of hematologist Elena Mishurina. 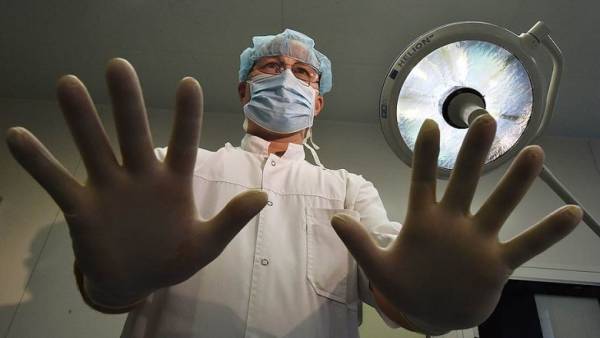 On Monday, authorities of the capital have responded to high profile court decision in relation to the doctor-a hematologist Elena Mishurina that Cheremushkinsky court sentenced to two years imprisonment. The court found that it has carried out a diagnostic procedure led to the death of the patient. Moscow mayor Sergei Sobyanin said about the need for “the most correct of the proceedings” the Vice-mayor of Moscow Leonid Pechatnikov has called the incident a “monstrous miscarriage of justice”. Respondents ‘ b ‘ experts stated the need for legal change in cases of health care workers: transferring them from the criminal code to the administrative code.

The head of the Hematology service of the Moscow city clinical hospital No. 52 Elena Mishurina was convicted January 22, 2018, according to the article 238 of the criminal code “rendering services not meeting safety requirements, and entailing by negligence the infliction of grievous bodily harm or death of the person”. The reason for the initiation of the case was conducted in 2013 diagnostic procedure — biopsy (biopsy sample of bone marrow).

Four days after the procedure, the patient, a 55-year-old man suffering from multiple cancers, he died.

As the cause of death was bleeding that occurred allegedly because of trepanobiopsy. The decision of Cheremushkinsky court sentenced the hematologist to two years in a penal colony, has caused outrage among health workers: a petition on the website Change.org demanding a retrial was signed by more than 64 thousand people. In addition, physicians expressed support for the MS Misurina, placing a picture of her instead of their avatars in social networks and by posting messages with the hashtag #Altamirano.

In defense of a convicted doctor made her colleagues from clinical hospital No. 52 and several other medical institutions, trade unions of health workers, the Guild of protection of medical workers and the “League of patients”. And on Monday 29 January, the head of the Department of health of Moscow Alexey Khripun on clinical-anatomical conference, read out a statement: “the Department is doing everything possible to reopen the case and hopes that the court will consider all of the additional opinions of experts”. Vice-mayor of Moscow Leonid Pechatnikov said that, “apparently, there was a terrible miscarriage of justice”: “appeal Filed in the court, it applied to all examinations which were not considered by the court of first instance”. He called “absurd” the fact that the hematologist “convicted under the article that suggests intent”.

This unprecedented decision. Even the famous “doctors ‘ case” — it is not.Leonid Pechatnikova-the mayor of Moscow

However, he noted that “in the history of the patient there is a certain expertise, which testifies not in favor of our colleagues”: “we Must all consider this carefully, without emotion, without politicking”. “Certainly, the life and health of patients is the most important, were the social networks of the mayor of Moscow Sergey Sobyanin.— However such cases should be considered the most correct and objective”.

Hematologists usually doing this procedure two to three times a day. And the patient signs the informed agreement where it explained the progress of the procedure, which can be unpleasant sensations, which anesthesia, indicate possible complications.Alex Shotglasses First city hospital

The chief of Department of the National medical research center of Hematology of the Faith of the Trinity explained “Kommersant” that allows biopsy to assess the condition of bone marrow hematopoiesis, and tumor volume: “the results affect the choice of treatment. The procedure is invasive as an injection into a vein or taking blood from the finger. Any invasive procedure carries risks. But here it is very small — 0,05%”. The expert added that diseases of the blood system “can be expressed including spontaneous bleeding, hematoma, thrombosis, without any mechanical reason”: “as far As I know, the patient had two cancers, one of which is characterized by increased bleeding”. Faith Trinity noted that it has “questions to the experts who carried out the autopsy” (performed in the clinic “Medsi”. The lawyer of Misurina MS Maria Zaytseva noted earlier that the company was not licensed to conduct an autopsy, “meds” this information “b” is not said, but expressed the hope that the revision of the sentence). “Even if hypothetically the bleeding arose from the procedure, can doctor for a potential complication, — says Mrs. Trinity.— Doctors can not tie the hands of fear, when it works. We work in Hematology — medicine critical decisions, we have very severe cases”.

If the doctor is afraid for his freedom, he will not perform his job to the extent in which he would be able to do it. This will lead to reduced performance.Faith Tricategories National medical research center of Hematology

Mr. Light is also called pathological conclusion, “strange and unconvincing”. He believes that to clarify the legal regime of the work of physicians needs practitioners: “we Need professionals who would have developed the law for doctors”. “You can’t put what’s not written in law”, — said the President of the “League of patients” Alexander Saversky. He said that article 238 of the criminal code speaks of the “safety requirements in accordance with the law on protection of consumer rights”, “But for trepanobiopsy of such requirements does not exist.” Also “raises serious questions on the spread of doctors that is criminal, not administrative responsibility” in the cases of careless forms of guilt: “In the administrative code at all compositions of administrative violations of doctors. This savagery.”