Miserly knight. The story of the miser who created IKEA

If the future Creator of the Empire of furniture stores was born in Russia, and tried to start a business like he did in Sweden, he constantly went in bruises. 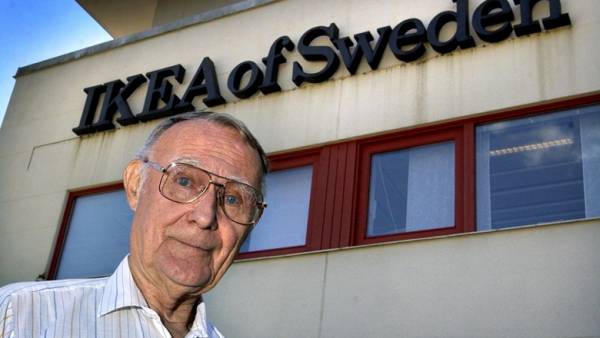 Four letters IKEA have become global brand. Some hate them, others are ready to worship them, but probably not enough where there were people who would not know about the existence of this global Empire selling furniture, but at the same time Swedish food.

The man who created this Empire, preferred to remain in the shadows. Even solid economic journal, did not know how much money Ingvar Kamprad. For example, in the same 2012, two reputable publications evaluated the state of the Creator of IKEA 3 and 42.9 billion dollars — agree, the scatter in the data is impressive.

Ingvar Kamprad refused to reporters in an interview, but the most interesting prefer to keep in the shadows. Questionable aspects of his life, he revealed only in the most extreme cases. Or when it was promised a substantial cash jackpot.

“Bobby had a hobby — he loved money…»

If the future Creator of the Empire of furniture stores was born in Russia, and tried to start a business like he did in Sweden, he constantly went in bruises.

He was only five years old when he began to earn by selling matches. On sale aunt bought Ingvar 100 boxes for 88 era, and then the boy began to market them for 2-3 or even 5 era apiece.

“I still remember the pleasant feeling that is experienced, having received its first profit,” admitted Kamprad, noting that the desire for trade was his real obsession.

Everything that could be sold peers, he happily sold, whether it caught fish or collected in the forest berries. However, in these cases, he still sold the fruits of their labor. A “crown” Ingvar from an early age was resale.

In school years, Kamprad sold belts, wallets, watches, pens. And the first batch of pens he ordered in Paris for a very low price and then sold at exorbitant prices in Sweden.

The concept of “gift” for Kamprad did not exist.

“Everyone is looking for the answer, where the main ideal, yet the answer is not present, accumulate capital” — a song from Soviet film “Courtship hussar” perfectly describes the principles that have guided Swedish.

Even then, in his youth, Ingvar began to send their advertising by mail, trying to expand the number of consumers.

Europe’s vengeance blazed the Second World war, in neutral Sweden, Ingvar Kamprad was only thinking of profit. The victory of the Nazis he was not afraid — indeed, it actively prepared.

The country’s neutral status did not prevent a considerable part of the Swedish society to sympathize with Hitler. That among Swedish Nazis was the Creator of IKEA, only became known in the 1990s.

In 1942, at the age of 16 years, Ingvar Kamprad became a member of the Nazi party. The task of the young Nazi was working with the new members and attracting investment.