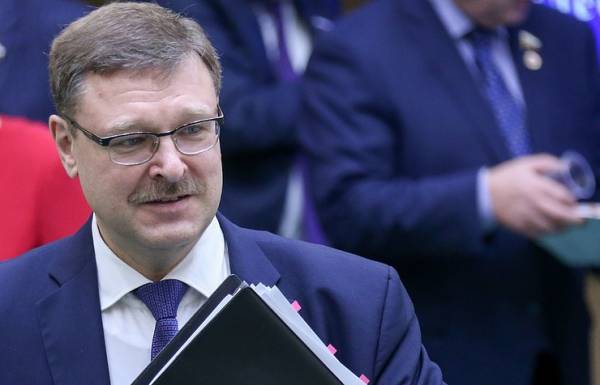 TOKYO, January 27. /TASS./ Russia is not playing a double game and is not helping the DPRK to circumvent the sanctions of the UN Security Council, in particular not engaged in re-export of coal from the DPRK in third countries. On Saturday said in Tokyo, the Chairman of the Federation Council Committee on international Affairs Konstantin Kosachev.

“I rule out such kind of action in the part, which is connected with a state policy of the Russian Federation. No double play is not by definition. All Russian departments at the level of the decree of the President the instructions for the scrupulous implementation of all resolutions of the UN Security Council,” – said Kosachev.

At the same time, he pointed to the possibility that “individual entrepreneurs can look for loopholes”. “This could happen in any country”, – said Kosachev. He stressed that evidence of such cases had not, but if the Russian side will receive the corresponding information “from reliable sources, and not from the media in the form of unsubstantiated claims”, then the appropriate agencies will take measures to curb such practices.

On Friday, Reuters reported that coal from North Korea, probably in violation of UN security Council sanctions were delivered in South Korea and Japan through Russia. The report reveals that North Korea in the period after 2017, when the UN security Council banned the purchase from Pyongyang of its main export commodities, at least three times that transported the coal to the Russian ports of Nakhodka and Holmsk. There the coal was unloaded, and then allegedly loaded on cargo ships that took him to South Korea and Japan. Official comments that would confirm this data, the Agency did not.

August 5, 2017, the UN Security Council tightened sanctions against North Korea in response to the launch of an Intercontinental ballistic missile “And 14”. Another resolution banned the export from the DPRK of a number of minerals and products, including coal, iron, lead, and seafood.

The DPRK would likely continue to conduct nuclear and missile tests after the winter Olympic games in Pyeongchang, said Kosachev.