Famous 70 years later: who was the heroine of the poster “We Can Do It!”

In the United States died Naomi Parker Frehley, who became the prototype of the iconic military poster “We Can Do It!” (“We can do it!”). She was 96 years old. Dozens of years she lived in obscurity, while an American symbol of feminism thought of another woman. 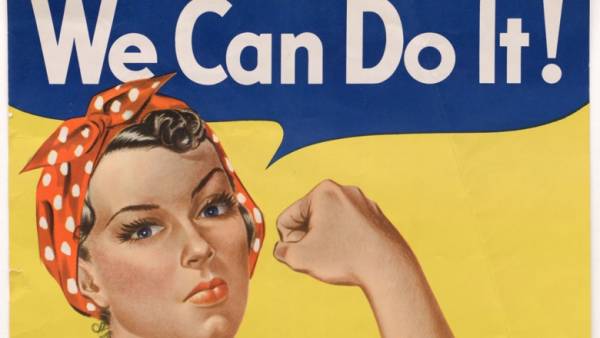 In the United States, in the town of Longview, Washington, died, Naomi Parker Frehley, who became the prototype “Klepalschitsy Rosie” for the cult of the military poster “We Can Do It!”. She was 96 years old.

Dozens of years she lived in obscurity, while an American symbol of feminism thought of another woman.

The author of the poster — artist from Pittsburgh J. Howard Miller. “Cleansize Rosie” — a collective image of women working in enterprises during the Second world war. Blue shirt, head scarf — red white peas. The inscription on the poster reads — “We Can Do It!” (“We can do it!”).

I believe that the prototype for the poster Miller was the photograph of a woman bending over a lathe. This photo was printed a number of magazines in 1943. However, there was no date and name of the model.

Decades later, Miller’s poster became a symbol of feminism — what does it not print, from t-shirts to fridge magnets. He also became a popular tattoo. “Cleansize Rosie” imitated even Beyonce, the motives of the poster used for his cover of the American magazine the New Yorker.

However, the heroine herself in the glory didn’t go in. For a long time it was believed that the prototype of the “klepalschitsy Rosie” was the other woman, Geraldine Doyle, presonality metal factory in Michigan.

She claimed that the photo, which became the prototype of the poster, was that she, and her claim is not disputed.

When Doyle died in December 2010, her obituary published Bi-bi-si, the New York Times and other major publications.

“About women”: faces and fates in the photos of Bonnici came out to protest against the ban on hijab Men South Africa staged a demonstration in defense of women.