Until recently, people believed that the octopus is a hideous creature to sink a lot of ships in the days of wooden navies. 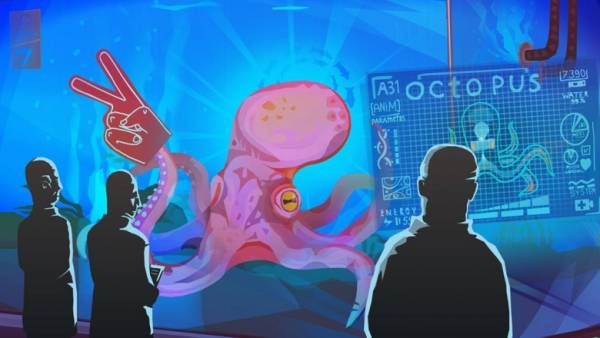 Naturalist and writer Sy Montgomery in her book “the Soul of an octopus. The mysteries of consciousness are fascinating creatures” talks about how the attitude of biologists to the inhabitants of the sea in the XXI century. From this Chapter of her book you will learn why octopuses are different from and similar to other animals, loving to play, to learn new things and able to “make friends” with the person.

On the rare warm and Sunny day in mid-March, when melting snow revealed the first mud in new Hampshire, I arrived in Boston. The harbour was full of people strolling along the promenade or sitting on benches enjoying ice cream cones. But I traded the gentle rays of the spring sun on the damp darkness of the New England Aquarium. I had an appointment with a giant Pacific octopus.

I knew very little about the octopus — to be honest, and had no idea what their Latin name Octopoda comes from the ancient Greek words “eight feet”. But what I did know intrigued me. Imagine an animal with the venom of a snake, beak, like a parrot, and ink, as in the old fountain pen nibs.

Octopus can weigh as a grown man, and stretch out on the length of the Cadillac, but he is able to squeeze his baggy, boneless body through a hole the size of an orange.

He can change the color and shape and taste of skin. But most amazing of his intelligence. My meager experience with these animals confirmed the veracity of this fact: while visiting the public aquariums I have, like many others, there is a strong feeling that not only I look at octopus, but he looks at me, and with no less interest.

Introduction to the intelligent mollusk

How is this possible? It is difficult to find more dissimilar to the human animal than the octopus. His body is designed quite differently. We have first comes the head, then the torso and limbs. The octopus — first the torso and then the head and limbs. Their mouth is located in the armpit or between your legs, if you count their limbs without hands and feet. They breathe water. Their tentacles covered with hundreds of suction cups tenacious structures which have no analogues in the world of mammals.

Octopuses not only are on the other side of the great divide between vertebrates — mammals, birds, reptiles, amphibians, fish and all the rest, but also among invertebrates belong to this not too intelligent animals, like molluscs, such as slugs, snails and oysters. And bivalves with no brain.

The separation between the human branch and the branch of octopus occurred around 500 million years ago.

If our branch has gone the way of the evolution of consciousness, then why not make another branch?

The octopuses represent the great mystery of “the Other”: though they seem completely alien creatures, their world — ocean — takes much more of the Earth’s surface than land (70% of the surface of the planet, more than 90% of habitable area). Most of the animals on our planet live in the ocean. And most of them invertebrates.

I wanted to get acquainted with the octopus. To touch another reality. To explore a different type of consciousness, if it exists. What’s it like to be an octopus? Does he have a human something in common? Whether such a cognition at all?

Therefore, when the Director of public relations the New England Aquarium and met me in the lobby and led him to meet with Athena, I felt like I was a special guest in another world. Although actually that was the day I began the acquaintance with our own world — our own blue planet is a truly incredible and fantastic area in which I devoted half a century naturalistic study finally feel at home.

The General overseer of Athens is not in place, and I fear: not every employee is allowed to open aquarium tank with an octopus, and for good reason. Giant octopus is the largest of the approximately 250 existing species of octopus can easily defeat the man. One suction Cup with a diameter of about seven inches he is able to raise more than thirteen pounds, while a giant octopus 1600 of these suckers. When you bite the octopus can inject neurotoxic venom, and his spit can dissolve flesh. In addition, the octopus can get out of an open aquarium and escape, but escaped the giant cephalopod is a serious problem both for himself and for the aquarium.

Fortunately, I called to help another caretaker, named Scott Dowd. A large man just over forty, with laughing blue eyes and grizzly beard, Scott a senior superintendent in the Freshwater gallery, located next to the galleries of the Cold Seas, where Athena lives. For the first time Scott got to the aquarium as a baby to the day of its opening on 20 June 1969 and since then, almost never left him. He personally knows almost every animal here.

Age Athens — about two and a half years, a weight of about eighteen pounds, Scott tells me, lifting the heavy lid on the tank. I climb three steps on a small mobile ladder and leaned over Luke. And here is Athena in front of me. In length it is about five feet. Her head is under “head” I mean not only the head, but the mantle, that is the torso, which is where in mammals, we used to see a head the size of a small watermelon.

Rather, a melon. When she came in, her head was no bigger than a grapefruit.Scott Ausmerican

Giant octopus is one of the fastest growing animals on the planet. Viewplease of balls the size of a grain of rice, for three years he could overtake in the length and weight of an adult man.

Scott barely manages to open the lid, like Athena, sitting in a far corner of the 2,500-liter aquarium, already here. Her body turns red from excitement. Holding two “hands” around the corner, the other six she pulls us on the surface of water appear the tips of its tentacles with white suckers. It looks like a palm of the person, open for a handshake.

I take off wrist watch and scarf, rolling up their sleeves and elbow-immerse hand in water. It is terribly cold, only 8 °C.

The tentacles instantly begin to move and grasping my hand. I feel the touch of a dozen inquisitive jelly-like suckers.

Not everyone will like this feeling. Naturalist and Explorer William Beebe believed the touch of the octopus repulsive. “Every time I have to make an effort to force myself to reach out and grasp the tentacle”, — he admitted. Victor Hugo described the contact with the octopus as “a nightmare incarnate”, leading to imminent death. “Many vile mouths molded to you this thing; Hydra fused with the person; the person merges with the Hydra. If the tiger can only devour you, the octopus is a scary thought!” — suck — says Victor Hugo in his novel “Toilers of the sea”.

Your muscles swell, tendons are twisted, the skin burst under the nasty suckers; blood splatters and mixes with the disgusting lymph clam.Victor Sugarman “Toilers of the sea”

Fear of octopuses deeply ingrained in the human psyche. “No other animal puts a person more terrible death in the water — wrote Pliny the Elder in his encyclopedic work “Natural history” of approximately 79, for the octopus wrapped around the human body with their tentacles, sucks through a suction pad, rips it to pieces…”.

But Athena touches me gently, though insistently. It’s like the kiss of alien. In the end, she teneobraznyh rears its head above the water surface, turns to me left eye — the octopus also has a dominant eye, as in people leading the hand, and looking right at me.