The President of the Philippines was allowed to shoot him

The President of the Philippines Rodrigo Duterte ordered the army and police to shoot him if he becomes a dictator. “If I stay in power and wants to become a dictator, shoot me. I’m not kidding,” said the head of state. Earlier Duterte said that is not going to remain in his post longer term. 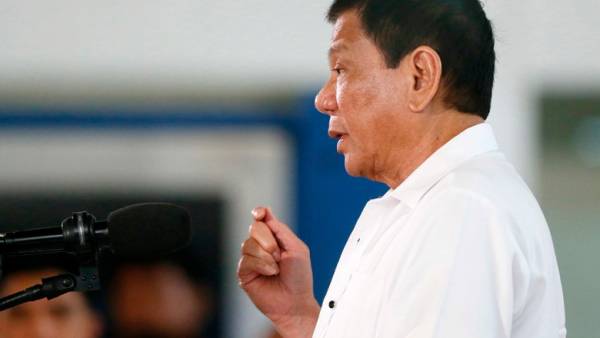 He stated this during a visit to a military base, his words are quoted in the Monday, January 22, Reuters.

If I stay in power and wants to become a dictator, shoot me. I’m not kidding.Rodrigo Dutasteride Philippines

He added that the work of the security forces “to defend the Constitution and protect the people.” “Remember that it is your sacred duty,” he said.

Last week supporters of Duterte in the lower house of Parliament voted for the constitutional Assembly. They propose to move to a Federal system of government, which will allow the President to be in charge of the country for two terms. The adoption of the new Constitution would lead to the postponement of the parliamentary elections of 2019 and revision of the term of office of officials.

While he Duterte said that is not going to remain in his post longer term and even would prefer to leave it early, reports Reuters.

Philippine President known for his controversial statements. So, in November, he admitted that as a teenager during the stabbing killed a man. The President also vowed to kill officials involved in the drug trade, and threatened to eat the liver of extremists.

In December 2017 Duterte said that he has changed his views on sexual matters and from now on advocates of same-sex marriage.