Paid-in closet and a seat in the dining room: VIP services in Russian schools

Parents of Russian students complain that children in some educational institutions are divided into “rich” and “poor” — the first having lunch at separate tables and get naked in new wardrobes, and the second feed state subsidies and after school find your things piled in a heap in the normal changing rooms. “Газета.Ru” tells about the VIP service in Russian schools and how they legal. 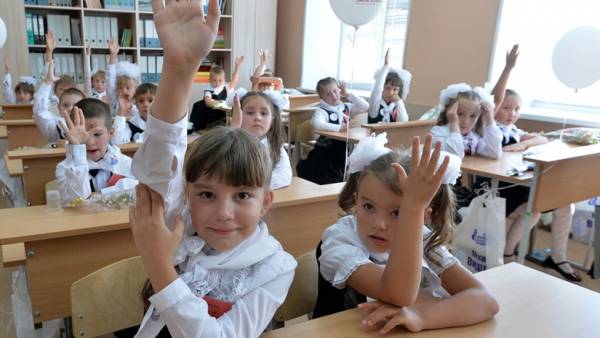 In some Russian schools there was a practice when in the comfort of their children, the parents pay of the administration or class teacher for more money.

Thus, you can put your child at a separate table in the dining room, and book a place in the new wardrobe. At the same time, children whose parents can’t afford to pay for VIP services, feel left out and often become targets of ridicule by their peers.

A few days ago it became known that in Yekaterinburg, the pupils of the gymnasium № 37 paid for the surrender of coats and jackets in the locker room. It turned out that pay closet operates in the school for seven years — for the individual lockers students pay 150 rubles a month.

The Director of the gymnasium Svetlana Trukhina reported that pay closet appeared due to the fact that the school is designed for 660 children, but in fact it trained 900 people. Trukhina emphasized that the parents themselves insisted on the opening of additional closet. Otherwise I would have had to transfer school to work in two shifts.

Parents of students also complained about the huge amount of fees and other services. “Cleaning, security — 5,000 rubles, and so with or without, but certainly a closet-it can be free to do so. Will soon have to pay an entrance fee will!”, — outraged in social networks one of the mothers.

The situation became interested in the local Prosecutor’s office, where he said that in high school there are two parallel free locker, but for all they lack. “The Prosecutor’s office will investigate whether there is a real opportunity for all students to leave their coats in the locker room or the use of pay locker room is a necessary measure. Requested documents regulating the procedure for crediting the monetary funds paid for the use of the locker room,” said the Agency.

The Commissioner for children’s rights in the Sverdlovsk region Igor MOROKOV called the organization paid cloakrooms in schools, segregation of children, a consequence of managerial infantilism and pedagogic incompetence of the school administration. “References to the lack of funding is not appropriate. Control should be able to, this is especially important when funds are insufficient. And therefore, school principals need to teach, and to assess their ability to manage and according to these indicators, not only on the results of the organization and delivery of OGE and EGE,” said MOROKOV.

A little earlier, on 11 January 2018, “dressing scandal” came to light Krasnodar media, which reported that the class teacher of the third class SOSH № 100 maintains a “black list”, and also requires parents money on a new wardrobe.

According to the journalists complained of parents, conflict in the class happened about a month ago, when at the next meeting, the teacher raised the issue of the new changing rooms, as the old premises left much to be desired, and things children, it is often dumped in a pile. Counting all expenses, homeroom teacher said that the purchase of cupboards, tables, racks and banquettes will cost 60 thousand rubles. On the proposal of the parents to build a budget closet the teacher said: “Either do that, or wear your children with you.”

Parents also complained that the teacher has a “black list”, the members of which are ignored during lessons and other school activities. “She even asks for money from these students for her present not to put it in an envelope to the total. Supposedly nothing is needed from such infidels,” said one of the representatives of the parent community edition “Notepad Krasnodar”.

This table is not to pour

If paid in wardrobes in secondary schools spoke more recently, the debate about the VIP seats for the children of wealthy parents in the dining halls was born two years ago. So, in January of 2016, it became known that the pupils of one of the Samara schools receiving free meals, push for a separate table — while their classmates are paying for the diet, are located in a different place and with a more extensive menu.

The parents of the “beneficiaries”, the indignant behavior of the administration, launched a petition to Vladimir Putin on the platform Change.org. “The children in the class are divided into tables on the so-called “paysites” and “besplatnikov”. “Paying students” menu is always complete and consists of two courses and a drink, and “free” served other dishes, mostly cereals, such as sausage (soup do not give),” said the mother of one of pupils of the Samara school Olga Petina. She added that “budget” meals were often tasteless and cold.

But the greatest concern of parents has caused the quality of school Lunches, and the fact that the children in the class were divided into two camps and began to engage in conflict. The petition also noted that school meals, which is regulated by the sanitary norms and regulations must be comprehensive and provide the body with essential vitamins and minerals. SNiP, noted the authors of the appeal, can’t be different for the “beneficiaries” and “paying students”.