According to the Deputy Minister of internal Affairs of Kazakhstan, the drivers used it to heat the passenger compartment. 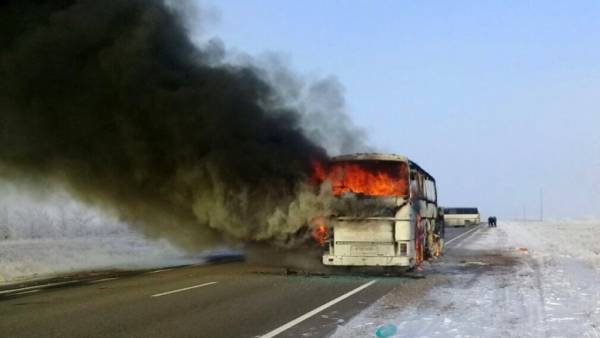 ASTANA, January 19. /TASS/. The cause of the fire of the bus in the Aktobe region of Kazakhstan became careless handling of fire, the place of the accident discovered a blowtorch. On Friday, the Deputy Minister of internal Affairs of Kazakhstan Yerlan Turgumbayev said, quoted by the press service of the head of administration of Aktobe region.

According to the basic version, the cause of the fire is careless handling of fire. On the scene found a blowtorch, which is used with combustible mixture, especially gasoline. At the same time, in the course of investigations and interrogation, it was found that was [on the bus] capacity plastic with five litres of petrol.Yerlan Turganbaevna of the Minister of internal Affairs of Kazakhstan

According to him, the investigating authorities on 19 January started interrogation of victims.

“Version confirmed by the testimony of survivors. Due to the fact that the motor vehicle stalled, and the car was cold, blowtorch in this bus was used as a heater. She worked for more than two hours, of course, gas-and-gasoline mixture filled the car, and when you accidentally spilled a container of gasoline, a fire broke out that almost immediately, within five minutes, claimed the lives of all the citizens who were in the bus,” — said Deputy Minister of internal Affairs.