As it became known””, the FSB found that in bribes to senior officials of the TFR for the release from detention of criminal authority of Andrey Kochanova (Italian) — the closest companion of the thief in law Zachariah kalashova (Shakro Young) — in the summer of 2016 has been allocated $500 thousand, as previously thought, and exactly ten times more. These funds, according to investigators, were gathered a group of close to Shakro businessmen at the request of the then chief of Central Board of the RCDS Mikhail Maksimenko. However, before intervened in the situation, security officers, representatives of Shakro managed to convey to the Committee only two tranches totaling about $1 million. 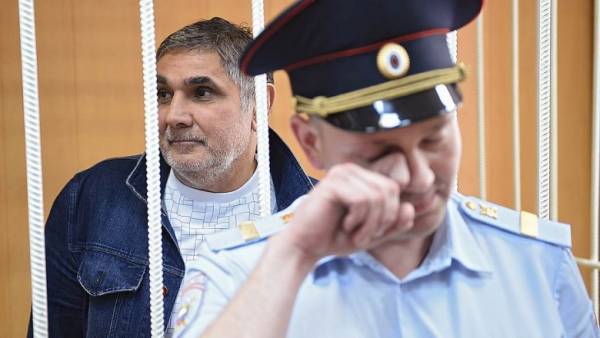 According to the close investigation of the source “b”, Zakhary Kalashov, whose criminal case about extortion of 8 million rubles. the owner of Elements restaurant Jeanne Kim listen now in court, directly related to this crime were not. The initiator of tough negotiations with Mrs. Kim and the incident followed a firefight on 14 December 2015, according to investigators, was a close associate of the thief Andrei Kotunov. That followed the arrest of Shakro Italian, according to the interlocutor of Kommersant, has taken to heart and ordered his assistant to find a way to influence the investigation and to secure the release of a colleague from detention.

People from the entourage of the thief-in-law asked for help to big merchants who Shakro at different times helped to solve problems with criminals. They immediately responded to the call, gathering a total effort of about $5 million the same amount, according to members of the scheme, requested the then chief of the interagency cooperation and private security RCDS Mikhail Maksimenko. For the money Mr. Maksimenko, who led not only division, but also the security service of the head of the RCDS Alexander Bastrykin allegedly promised to resolve all issues with the investigation, ous internal procedural control and direction of the Committee.

The first tranche of $500 thousand to Mr. Maksimenko, as believes a consequence, was received from the owner of a chain of restaurants Oleg Shahmatova. Businessman in restaurant Novinsky passage handed a box of money to the former Colonel of the Ministry of internal Affairs Evgeny Surikovu, who led the last time one of the controlled Shakro Chopov, and he gave it to her boyfriend, Deputy head of USB SKR Denis Bogoroditskom. The latter, according to the investigation, took the bribe to his chief Vladimir Limonova, which she did to Mr. Maksimenko. I wonder what he, according to investigators, took only $400 thousand and $100 thousand was returned to Mr. Lamonova to split Commission between all intermediaries, and that was done.

Note that the results of the investigation of this episode, the court received the indictment just for one Mr. Maksimenko. The briber Shahmatov escaped prosecution because were surrendered. Active repentance saved from punishment and facilitator Bogoroditskogo, but Mr. Lamonova will have to answer under article 290 of the criminal code (receiving a bribe) later. By the way, a similar accusation on this episode brought the former Deputy head of the capital of GSU SKR Denis Nikandrov, who, according to the investigators, directly supervised the procedure of re-qualification of charges against the Italian on softer article of the criminal code. He claimed to have participated in the corruption scheme only out of fear — he allegedly feared that Mikhail Maksimenko in the event of failure will hinder his career in the TFR. But the FSB he apparently did not believe — yesterday security officers have achieved in Moscow city court prolonged arrest of mister nikandrova for two months. The more that Dennis Nikandrov, as believes a consequence, was related to yet another episode of receiving especially large bribes Colonel Maksimenko. The FSB believes that the release of the Italian handed over €500 million and a major developer Dmitry Smychkovski, now living in the United States (it is declared in the international search). According to investigators, the money, the businessman passed through the same intermediaries, however the rewards this time they received, and their criminal prosecution on this episode was halted. For example, removing the claim from Vladimir Limonova, the investigation asked the court to extend his arrest only a month. During this time, the ex-security guy plans to finish already begun the procedure of conclusion of a pretrial agreement with the Prosecutor General’s office and out of jail under house arrest.

But the episode involving Mr. Smickovska there was one bribe — taker- the former head of the Department of the TFR in the Central administrative DISTRICT of Moscow Alexey Kramarenko, recently arrested. According to investigators, obtained from Mr. Smickovska money Mikhail Maksimenko assigned just to the “urban” and “regional” levels.

Meanwhile, according to “Kommersant”, from the testimony of the accused and the materials of their rapid development, it follows that in addition to gentlemen Shahmatova and Smickovska money for the release of the Italian provided for at least three of a businessman. To cooperate with the investigation, they do not want to force them to do so FSB: alleged bribers or in hiding abroad, or have special legal status and therefore untouchable. Note that Mr. Rahmetov became available for investigation in General by accident. The fact that early in the investigation, he was questioned as a witness — as a person, officially, to pay for the services of lawyers of the Italian, then the businessman went to the US. And after a few days exploring tasking, the KGB realized that in Novinsky passage Evgeny Surzhikov received a box of money from Mr. Shahmatova. Then they contacted the businessman through his lawyer and recommended the giver to plead guilty and thereby avoid problems in the future. He did just that.