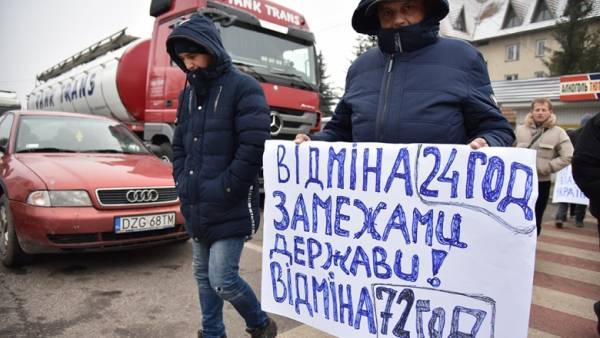 KIEV, January 10. /TASS/. Several dozen people blocked two checkpoints on the Ukrainian-Polish border to protest against the new changes in the Tax code of Ukraine to limit duty free imports. This was reported in the local media.

Protesters from 11:00 (GMT) began a protest, they go on a pedestrian crossing at checkpoints. As announced earlier, the campaign will last until approximately 16:00. At the checkpoint shehyni — Medica protesters to avoid clashes promised every 30 minutes to pass 10 cars across the border.

The protesters oppose changes to the Tax code of Ukraine that entered into force with the beginning of the year. The changes stipulated that no duties on Ukraine it is possible to import the goods in hand or accompanied baggage amount of up to €150 (in airports to €1 thousand) and weighing up to 50 kg. However, these standards will apply to those who were absent in Ukraine for more than 24 hours and stay in Russia not more than once every 72 hours. If the time frame is not met and the crossing of boundaries happens more often 72 hours, then no duty can be imported only goods worth up to €50.