Became known cause of the arrest of former Iranian President Ahmadinejad

MOSCOW, 7 Feb — RIA Novosti. In Iran in support of the protests arrested former President Mahmoud Ahmadinejad. Detention, as found by the newspaper Al-Quds Al-Arabi, is due to travel policy in Bushehr. 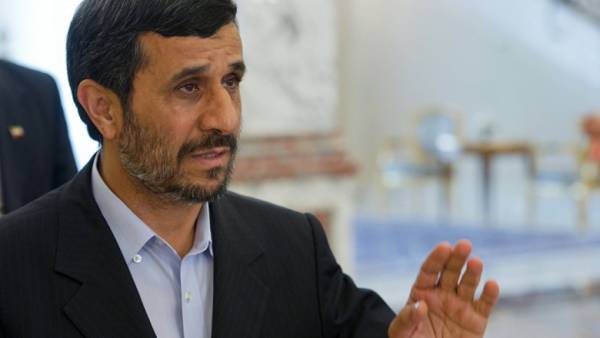 Thursday during a speech to residents of the city, Ahmadinejad lashed out at current President Hassan Rouhani and his government, accusing them away from the problems of the people, “bad management” and assigning a “monopoly on social wealth.”

The arrest policy, according to the newspaper, was held with the approval of the Supreme leader of the Islamic Republic Ali Khamenei.

In the major cities of Iran from December 28 to continue the protests. The main demand of the protesters is to improve the economic situation in the country. There are demonstrations in support of the current authorities.

The instigators of the protests

Rouhani has repeatedly called on the demonstrators to cease to participate in uncoordinated protests. The President promised that Tehran is closely engaged in the solution of problems that a disgruntled demonstrators. To such questions it brought high prices, unemployment and air pollution.

Recognizing the existence of internal problems, the authorities believe that some forces are trying to use the speech of people only to destabilize the situation in the country. The Secretary of the Supreme national security Council of Iran Ali Shamkhani said that the meetings are held in the framework of the “proxy war” being waged against the Republic of USA, UK and Saudi Arabia.

According to Shamkhani, the agents of these States run the social campaigns that coordinate the demonstrations. The authorities admit that the protests will soon be in the “hot” phase. According to Khamenei, the “enemies” seek to harm the country and is ready to use not only money but also weapons.