Christmas according to the Julian calendar: history and traditions of the holiday

On the night of January 7, millions of Christians prepare to celebrate one of the major holidays. 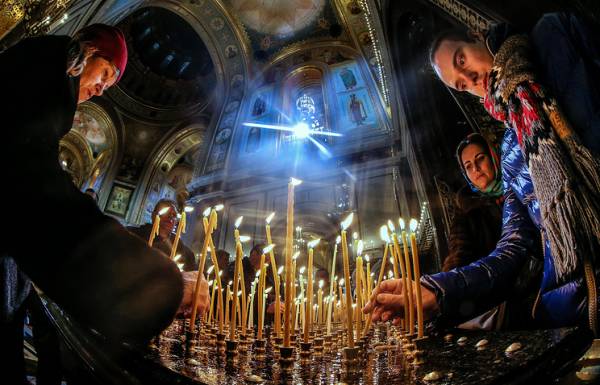 From 6 to 7 January comes the most important for the Christian culture holiday — Christmas.

TASS talks about the importance and history of Christmas, why not celebrate the night of 7 January Orthodox holiday and also about traditions of the celebration.

The history of the holiday

On this day believers celebrate the birth of Baby Jesus of the virgin Mary. According to Christian doctrine, the Son of God was born in Bethlehem. Here came Mary and her husband Joseph to participate in the census, which was held by the king of Judea is Herod the Great. All the hotels in Bethlehem were occupied, so the Holy Family was forced to stop for the night in the cave, the corral. Here was born the Baby Jesus, the crib became the nursery.

As sung in these festive days in churches, the manger became a “repository cannot fit God.” The birth of the Messiah in Bethlehem was foretold by the prophet Micah more than seven centuries before the event itself. The birth of Jesus is described by two evangelists — the apostles Matthew and Luke.

The views of historians about the exact date of Christmas vary.

In contemporary studies date of Jesus ‘ birth are in the range between 12 BC to 7 ad, when carried out the only known population census in the period.

No historian of this period in his writings did not mention the birth of Jesus. Theologians explain this admiratly of Christ’s birth, noting that it was superior to historical events.

The Meaning Of Christmas

The feast of the Nativity, according to the teachings of the Church, symbolizes the reconciliation of man with God. Christmas foretells the redemptive feat of Christ and the renewal of the human nature.

Why is not quite correct to call Christmas Orthodox?

One can often hear that Christmas is celebrated on 7 January, called Orthodox, and celebrate 13 days before December 25 — Catholic. However, this is not quite true. The fact that on the night of January 7, Christmas is celebrated four of the 15 Orthodox churches — Russian, Georgian, Jerusalem and Serbian. In addition to them, the day Christmas is celebrated Athonite monasteries living according to the Julian calendar, as well as many Catholics of the Eastern rite (e.g. the Ukrainian Greek-Catholic Church) and part Protestant.

At the same time, some Orthodox Christians celebrate Christmas on the night of December 25 as the Catholic. The people in attendance were 11 of the 15 local Orthodox churches who follow the revised Julian calendar, coinciding with the Gregorian. Together with them, the holiday is celebrated Protestants, living in the Gregorian calendar.

Different dates of Christmas (December 25 or January 7) is due only to different calendar systems (Gregorian and Julian calendars).

The history of the celebration in Russia

In the 1920-ies in the Soviet Union, religious festivals were eradicated. In 1935 there was a crisis in government policy and the Christmas tradition was restored as part of a secular celebration of the New year (1 January), although with some edits.

Gifts, visit to Santa Claus became part of Christmas traditions and Christmas lost its original Association. And on a Christmas tree in 1937, which took place in Moscow in the hall of columns, instead of the Golden star of Bethlehem appeared red. Since then, the “Christmas tree” as “Christmas”.

At the state level Christmas celebration back in 1991, then January 7 was declared a holiday.

Now Christmas is part of the total weekend, starting with the New year.

Before Christmas, the faithful observe a strict forty day fast, he lasts six weeks, from November 28 to January 6 inclusive. The day before a holiday (Christmas eve) decided to prepare a traditional dish of boiled wheat or rice with honey — sochivo. By tradition, believers abstain from all foods until Christmas.

The celebration of Christmas takes place at night on January 7 — at midnight in the temples begins a solemn service.

Near the temples are set Nativity scenes with figurines of the Holy Family, three wise men, angels, animals. After the solemn Liturgy the faithful gather for the Christmas table. In modern Russia the tradition of giving each other gifts is more related to the New year, but in recent years, some congratulate loved ones and merry Christmas.

Period from January 7 to Epiphany eve (January 18) is called Yuletide. At this time, people visit each other and help those in need. To this period also belongs the tradition of Christmas carols — songs glorifying Christ and Christmas, which used to get around the courts, wanting kindness and joy by collecting gifts in the form of treats. This custom appeared after the baptism of Rus in the course of adaptation of Christian culture to pagan customs.

Traditionally, on the Christmas table are 12 meatless dishes representing the number of apostles. Everyone present at the table must eat at least one spoonful of sochivo for a healthy and prosperous life.

After the service, the faithful break their fast usually meat and fish dishes. Decoration of the Christmas table is poultry meat. The chicken was served cold, goose or duck — hot.

At Christmas every house also baked pies, cakes, carols (made of rye unleavened dough with different fillings), which treated those who came caroling.