The constitutional court (CC) Moldova has found a way to approve the law banning the broadcast of news and analytical broadcasts from Russia, twice rejected by the President. On Friday, 5 January, reports RIA Novosti. 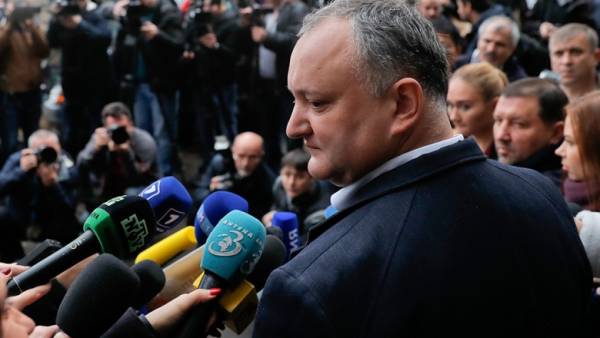 The court ruled that to make this decision can the speaker of Parliament or Prime Minister that has the authority to temporarily perform the duties of the President. For this President Igor Dodon will again dismiss.

The law against foreign propaganda was adopted by the Parliament at the end of December 2017. It prohibits the broadcast of programs of television and radio with information, analytical, military or political content that are produced in countries that have not ratified the European Convention on transfrontier television.

He twice rejected it and appealed to the constitutional court about the constitutionality of its provisions. Thus, according to the law of Moldova, he is obliged to have this document approved in case if the Parliament adopts it twice.

Earlier in KS with the request to appoint an acting head of state addressed Sergei Sirbu, MP with the parliamentary majority of the Democratic party. He recalled that in October 2017, the COP allowed the speaker of Parliament Andrian CANDU signed a decree on the appointment of defense Minister Yevhen Sturza after the failure of the President.

January 2, 2018, the constitutional court has suspended the powers of Dodona in order to appoint a new foreign Minister and six members of the government. To perform the duties of the head of state to make these decisions will be the Chairman of the Parliament of Moldova Andrian CANDU.