MOSCOW, 15 Feb — RIA Novosti. The fragments of DNA extracted from the bones of the rabbit by Charles Darwin, helped scientists to prove that three different populations of these animals living in Australia and Europe, in the same way adapted to the emergence of a dangerous virus. Write about the scientists, who published an article in the journal Science. 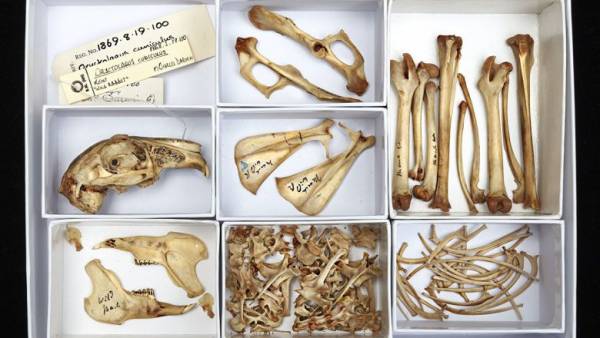 “We compared the DNA of rabbits who lived on Earth before the epidemic of myxomatosis, and the genomes of their modern descendants, have developed resistance to the action of the virus. We have shown that in all three countries, natural selection in the same way changed the structure of the genes of the immune system,” says Joel Alves (Joel Alves) from the University of Cambridge (UK).

everyone has their own cockroaches. As parasites and insects discover the secrets of the past

The development of almost all multicellular living beings manages two factors — natural and sexual selection. In the first case, the evolution of the conduct of a changing environment, including new pathogens and parasites, and in the second intraspecific competition for the opportunity to procreate.

A vivid example of the first process, as he wrote to Darwin himself, for it was the story of the Galapagos finches — small birds of the family of passerine with extremely diverse diets and habitats. These birds came from one ancestor, but the shape, structure and size of the beak has significantly changed in the adaptation to new ecological niches.

In other cases, as noted by Darwin, the representatives of different species or populations of animals often develop similar adaptations that help them survive if this is facilitated by environmental conditions. For example, dolphins and sharks have similar body shape, despite the fact that they belong to different classes of living beings.

Alves and his colleagues discovered another interesting example of how natural selection the same impact on the evolution of isolated from other groups of animals, studying the history of the spread of myxomatosis, one of the most dangerous viral diseases of rabbits, among the European and Australian populations of these rodents.

The source of the epidemic, which began in 1950 in Australia, was not nature, but man. The fact that rabbits have no natural predators on the southern continent, where they were imported from Europe in the mid 19th century, which they multiplied there so much that they began to threaten not only the planting of wheat and other grains, and wild nature.

The Australian government has decided to apply to deal with them a kind of “biological weapons” — South American Myxoma virus, against which European rabbits have no immunity. This measure has proven to be extremely effective — during the first year of the “war” pathogen destroyed 500 million four-legged “pests” and have reduced their population to a minimum.

A few years after this virus was illegally imported into the territory of France and the UK, where it destroyed about 90% and 99% of wild rabbits, with whom the local authorities had not planned to fight. The surviving rabbits and in Australia and in Europe have acquired partial immunity, and now only one in three rodent dies when infected with myxomatosis.