The Chairman of the Federation Council Valentina Matvienko considers harmful attempts to control all the processes in the regions from the centre. In her opinion, it violates the principle of federalism established in the Constitution, and reduces the responsibility of local authorities. 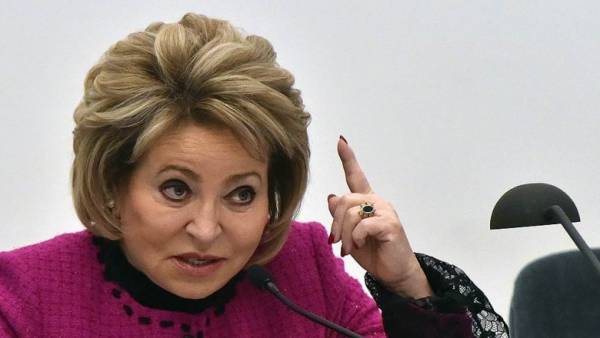 “Sometimes attempts of Moscow to regulate all aspects of activities of subjects of Federation, they are wrong, they are harmful from the point of view of interference in the competence of the actors, even the municipal authorities”, — said Mrs. Matvienko at a meeting with the leadership of the upper house of Parliament with Prime Minister Dmitry Medvedev (quoted by “Interfax”).

That excessive centralization is harmful for Russia, MS Matviyenko said. So, in November, speaking at the joint session of Council of chamber of Council of Federation and the Presidium of the Russian Academy of Sciences, she urged not to forget that “we are still a Federal state”.

On the eve of the Russian presidential aide Vladislav Surkov published in “Nezavisimaya Gazeta” article, “a Long state of Putin.” In it he talks about the new era of “Putinism” in which “the different powers converge to the personality of the leader” and all based on “trust, communication and interaction of the ruler with the citizens.”