Surkov: in many years Russia will still be the state of Putin

The Russian presidential aide Vladislav Surkov published in “Nezavisimaya Gazeta” article, “a Long state of Putin.” In it, he ponders about the future of the “Putin system of ruling” and the ideology of “Putinism”. 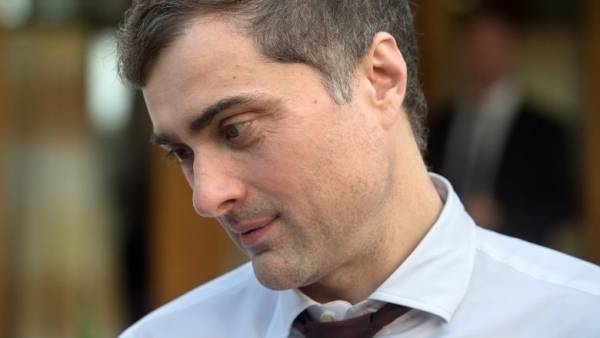 “Russian history is known, therefore, four main models of the state, which conditionally can be named after their founders: the government of Ivan III (Grand Duchy/Kingdom of Moscow and all Rus, XV—XVII centuries); the government of Peter the Great (Russian Empire, XVIII—XIX CC.); the government of Lenin (the Soviet Union, the twentieth century); the state of Putin (Russian Federation, XXI century)”, — Surkov writes. In his words, “a big political machine Putin is gaining momentum and is set in a long, difficult and interesting work.”

Its full capacity is far ahead, so many years later Russia is still Putin’s government.Vladislav Sarcopenic of the President of Russia

According to Surkov, the existing model of political system is an effective means of survival and exaltation of the nation in the coming decades. He urged to understand “Putin’s system of ruling” as an ideology of the future. “This should be done for anyone who is not Putin, and would like to be like him. To be able to broadcast it methods and approaches in the coming days,” writes Vladislav Surkov.

Foreign policy is credited with Russia’s interference in elections and referendums across the globe. In fact, the case is even worse — Russia intervenes in their brain and they don’t know what to do with my own altered consciousness.Vladislav Sarcopenic of the President of Russia

Western democracy he calls “deep States” — “dynamic equilibrium meanness, greed, balance, harmony trickery”. “Our system, as it does everything, looks, of course, not elegant, but honest,” he adds.

“The high internal stress associated with the retention of a huge heterogeneous spaces, and permanent residence in the midst of geopolitical struggle doing military-police functions of the state the most important and decisive. They are traditionally not hiding, but rather demonstrate,” — said the assistant to the President. “The ability to hear and understand people, to see through him, to the depth of choices is a unique and superior dignity of the state of Putin” — he said.

Vladislav Surkov is not the first time acts with lyrics that can be called software. In 2008, he, being on a post of the first Deputy head of the presidential administration, presented the book “Teksty 97-07” containing his public appearances for the period. One of his last articles were published in the journal “Russia in global politics” in April 2018. In January, the American Foreign Policy magazine recognized Vladislav Surkov, one of the main thinkers of the world.