Matvienko: the Federation Council has no more senators with a questionable past 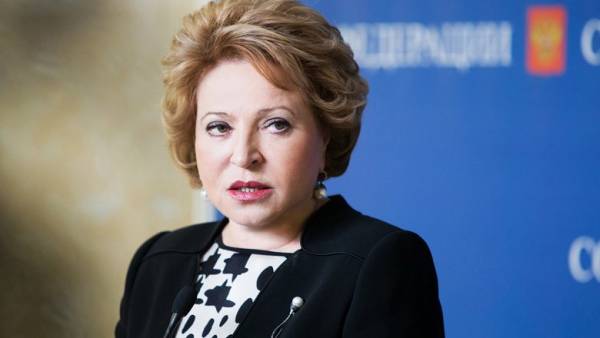 According to Matvienko, the case of a Senator from Karachay-Cherkessia Rauf Arashukov. She told me that she intuitively felt the error of head of KCHR Rashid Temrezov, who offered Arashukova as a Senator from the Republic.

But I could only advise, no one can dictate to the region.Valentina Matviyenko Chairman of the Federation Council

She also noted that at the time of appointment Arashukova to the Federation Council, he had no criminal record, but there have been rumors that he may be involved in a number of crimes.

After the incident with Arashukova upper house of Parliament to tighten the procedure for verification of candidates for Senator, said Matvienko. As it is now being discussed with law enforcement, she added.

A position he has held from September 2016 Arashukov was a Senator from the Executive branch Kacarevo-Cherkessia after the re-election of the head of Karachay-Cherkessia Temrezov.

At the end of January Arashukova detained during a meeting of the Council of Federation. For this purpose specially there arrived the Prosecutor General Yuri Chaika and the Chairman of the Investigative Committee of Russia (TFR) Alexander Bastrykin. For the removal of immunity Arashukova senators voted almost unanimously, one abstention.

Arashukova was charged with participation in a criminal organization, two counts of murder on preliminary arrangement from mercenary promptings and pressures on the witness. According to the investigation, the Senator was part of the criminal community, organized by his father Raul by Arashukova. On the same day, the Basmanny court sent the Senator under arrest until March 30. Arashukov pleaded not guilty. In addition, the same day he was arrested his father who was accused of organization of criminal groups, the purpose of which was theft of natural gas from Gazprom at more than 30 billion rubles.

Despite this, Arashukov Jr. is still a Senator. To lose the mandate of a Senator can only in two cases: if he will write a statement about it or by court order, told informed Matvienko.Help