The oldest wild bird has hatched a chick

The oldest known wild bird, is not less than 68 years old, has hatched another chick. 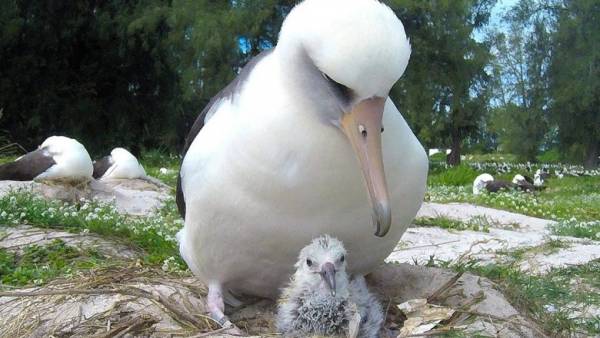 The female Laysan Albatross named wisdom (Wisdom in English — “wisdom”) is considered the world’s oldest wild bird. She, as an adult (i.e. she was at least six years), was spotted by biologist Chandler Robbins in 1956. Then it was off the market, and then, in 2002, Robbins was again seen wisdom, failing to recognize her at the number on the ring.

As reported, in late November 2018, wisdom came to the nesting area and laid another egg. (Laysan albatrosses breed on midway Atoll, which is located in the Northwest Hawaiian Islands.) Now, however, the blog service of protection of fish resources and wildlife, the U.S. has information that wisdom (and her partner Akeakamai, whom she met in 2006) hatched chick. It is assumed that this is the 37th chick wisdom.

In the nest the chick will stay approximately five to six months, and then leaves the island. He will come back, as expected, at the age of about five or six years and will have to find a partner.