Afghanistan want to do without the Islamic ISIS

Afghan politics and the Taliban signed a Declaration in Moscow. 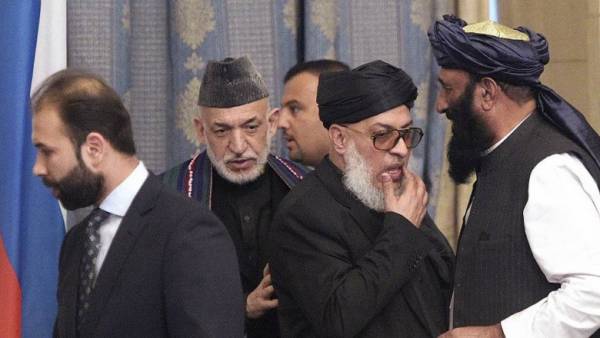 In Moscow the meeting ended with the influential Afghan politicians representing the government in Kabul and the delegation, not the Taliban. The meeting resulted in the signing of the Declaration in which the parties expressed support for the agreement on a total withdrawal from Afghanistan of U.S. troops. The participants also agreed that Afghanistan should not become a refuge for terrorist groups like “Islamic state” (IG, is prohibited in Russia). In addition, the decision “as soon as possible” to hold a second round of “inter-Afghan dialogue.” Venue the conference will be to Doha.

The second day of the conference “inter-Afghan dialogue” held in Moscow “President-hotel”, was organized much better than the first (about the opening of the meeting see “Kommersant” on 6 February).

Exactly at ten in the morning the participants went to the hall for the meeting in closed session. On the second day of the conference its participants were joined by former Advisor to President Ashraf Ghani Ahmadzai on issues of national security, and now his opponent is Mohammad Hanif Atmar.

For urgent matters Mr. Atmar has not departed from Kabul direct flight on Monday, as did many other participants of the meeting, and had to get to Moscow with a connection that took the whole first day of the conference. As a result, environment in Moscow was the former President of Afghanistan Hamid Karzai, leader of the “Islamic movement of Afghanistan,” ATA Mohammad Noor, former Vice-President Mohammad younus Qanooni and second Vice-presidents, Haji Mohammad Mohaqiq — he, too, was dismissed, but trying to challenge it. Recall that the meeting was also attended by the extended delegation of the Taliban — not only representatives of the political office in Doha, but some of the Taliban from Kabul, renounced the armed struggle.

These people can be called the opponents of the current President, Ashraf Ghani Ahmadzai, and it is not surprising that his reaction to the Moscow conference was sharply negative, in the statement his office it was called “collection of power-hungry”.

However, the leader of the Tajik community in Afghanistan, ATA Mohammad Noor said “Kommersant” that the condemnation of President Ghani “the participants indifferent.”

Greedy people are the ones who hold on to his seat. A parish of peace in the country puts their interests at risk. ATA Mohammad Nur, the leader of the Tajik community in Afghanistan

During yesterday’s negotiations behind closed doors, the parties realized that the similarities in their looks more than differences, and therefore, the working group is likely to agree on a common Declaration to the end of the day.

However, at about 19:30 the delegation of the Taliban in full force left the room, called the Elevator and for some time stood in it. Closed doors could not disturb them and many photographers. However, because nowhere to go, the Taliban came out of the Elevator and returned to the meeting room.

“Everything is fine”, — said “Kommersant” Deputy head of the Qatar office of the organization Abdusalam Hanifi, holding rolled piece of paper with text in Pashto, apparently, a draft of the Declaration. However, what has been agreed by the negotiators, it became known in an hour. “The main achievement was the agreement on inter-Afghan talks with the participation of all parties, — said “Kommersant” Hanif Atmar.— The key is to support the ongoing efforts of the Americans and the Taliban in Doha. This is a breakthrough because for the first time after 18 years, the Taliban and the Afghans agreed to the intra-Afghan talks. We also agreed on key provisions of the peace agreement.”

In addition, the Declaration was the points that all parties will fight to Afghanistan from becoming a base for terrorist groups such as the banned in Russia “Islamic state”, however, the laws of Afghanistan should be based on Islam.

“Following an intra-Afghan meeting will be held fairly soon — within a few weeks in Doha,” said Mr. Atmar.

However, as it became known””, the possibility to hold such a meeting in Astana or Tashkent. In addition, at the initiative of the delegation of the Taliban from the Declaration removed the item requiring to connect to the format of the current Afghan government.

Before Afghanistan there is also the question of the presidential elections scheduled for July, but, according to experts, the election can not take place.

Another influential member of the opposition ATA Mohammad Nur has made it clear that the peace process can prevent to hold presidential elections. “If the results (of the negotiations.— “B”) are positive, we can postpone the election” — he said “Kommersant”. The leader of the Taliban office in Doha Sher Mohammad Abbas Stanikzai, in turn, reminded reporters that the movement considers the upcoming elections as “illegal”.

Russian expert on Afghanistan Arkady Dubnov also believes that the planned July presidential election will likely not take place. The main priority of Moscow to hold an intra-Afghan meeting Mr. Dubnov believes the peace in Northern provinces of Afghanistan, bordering with the former Soviet republics of Central Asia. “If Russia will be able to consolidate groups that can provide this security, and to enlist the support of people like Noor, Ismail Khan, the Prime Minister, Abdullah Abdullah, and partly Hanif Atmar, it will be an achievement,” the expert added.