Military buildup and a meeting with Kim Jong-UN: what’s to tell Donald trump during the annual message to Congress

The American President delivered a message of “state of the Union” in the U.S. Congress. During his speech, the head of States reported on the development of the latest missile defense system, has announced a meeting with the leader of North Korea, and also did not rule out the possibility of a new agreement on the elimination of intermediate and shorter-range missiles with Russia. 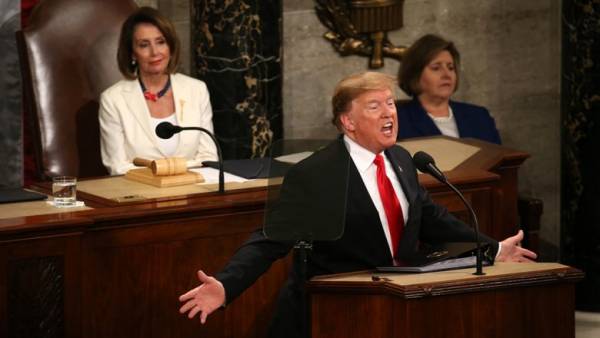 The President of the United States Donald trump delivered his annual message “state of the Union” in Congress. It has been broadcast on the White house website.

In his speech, the head of the States have paid much attention to the country’s military might. According to him, in the last two years, the United States “began full recovery” of its armed forces. For these purposes, the Pentagon had allocated $700 billion in 2018, and $716 billion in 2019.

My administration will never apologize for advancing the interests of America.

Commenting on the situation after the United States and Russia from the Treaty on the elimination of intermediate and shorter-range missiles (INF Treaty), trump said that Russia is to blame:

We have complied with the terms of the Treaty word for word, while Russia has repeatedly violated it. That’s why I announced the us withdrawal from the INF Treaty.The Treaty on the elimination of intermediate дальности08:58 (GMT)trump admitted the possibility of establishing a new contract after leaving ДРСМД5, Fevralskoye told how Russia will respond to the US withdrawal from ДРСМД4, favresse gave Russia coordinates testing missiles 9М729

If other countries refuse to sign the new document, according to trump, the States will have to spend on these military developments are much greater “than all others, and to develop even more than they do innovation.”