BELGRADE, 6 Feb. /TASS/. The leader of the unrecognized Kosovo Hashim Thaci is ready to sacrifice part of the self-proclaimed education for a final agreement with Belgrade. He stated this during his visit to Washington, said on Wednesday the Kosovo Gazeta express. 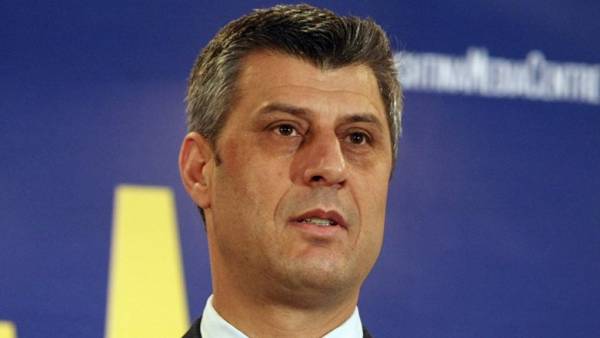 “If a small correction of the border — the price of the final agreement, then this should be acceptable,” said Thaci. At the same time, he stressed that the most important objects in the North of Kosovo — the Northern part of Kosovska Mitrovica, Gazivode reservoir with a power station and mining complex Trepca will be Albanian, and it is not discussed.

Thaci also said that Russia “is ready to accept the agreement, which will reach” side.

The leader of the unrecognized Republic does not conceal that the main purpose of the agreement is official recognition of Pristina, Belgrade and the subsequent accession of Kosovo to the UN. He also thanked US for the support and assured that he “will not accept an agreement which would be unacceptable to Washington.”

The Parliament of Kosovo declared Kosovo’s independence unilaterally in February 2008, and in 2010 the UN international court recognized this decision as legitimate. Currently the Republic of Kosovo, according to Belgrade, recognized by around 100 countries, while Pristina argues that such States 117. Against the recognition of Kosovo are more than 60 countries, including Russia, Israel, India, China, and five EU members.

In recent months, Belgrade and Pristina were actively discussing some compromise associated with the adjustment of borders and exchange of territories. The United States supports this idea, insisting on a final agreement that provides for the adjustment of borders of Serbia and the breakaway Republic. In turn, German Chancellor Angela Merkel spoke against the changes of borders in the Balkans, stressing that all countries in the region already have the prospect of joining the European community.