“Is the audience likes it.”

Politicians and experts consider the detention of Rauf Arashukov revealing. 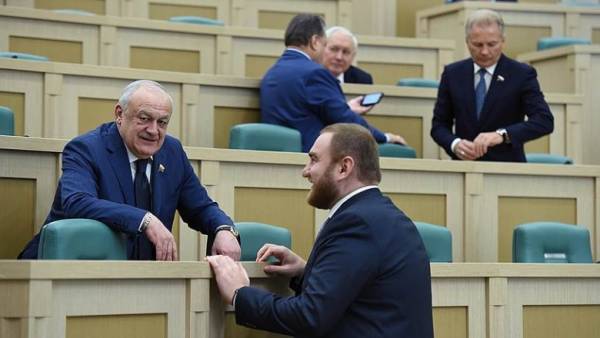 Interviewed by “b” politicians and experts talk about fairness and even “theatrical” arrest of the Senator from Karachay-Cherkessia Rauf Arashukov. What happened in the Federation Council (SF), they explain a state’s desire to demonstrate “the strength and hard attitude to restore order.” Representatives of the Duma opposition propose to give governors and legislatures that delegate senators, access to the documents of power structures. Representatives of the ruling party called these measures redundant.

The Senator from Karachay-Cherkessia Rauf Arashukov was the first member of the upper house, who was detained at the place of work, after obtaining the consent of the upper chamber on the lifting of his immunity. To address this question in SF arrived to the Prosecutor General Yuri Chaika. In SF was the head of the Investigative Committee of Russia (TFR) Alexander Bastrykin, and the outputs from the hall was blocked by the staff of the FSO. Stream meeting the time was turned off, and the closing “in the organization” warned the senators, the speaker of Valentina Matvienko (the procedure took less than half an hour). No signs of the impending operation to arrest was observed: SF no cars with flashing lights, and representatives of the Prosecutor General and the TFR, probably entered the building through the back door.

After the Federation Council gave its consent to the public Prosecutor to withdraw from the colleagues of immunity, arrest of Senator took place under the camera. Senator Arashukova asked to leave the courtroom men in civilian clothes outside the door and he was detained. The investigative Committee later published the video, which demonstrates how Rauf Arashukov introduced into the building of the TFR.

“He (Rauf Arashukov.— “Kommersant”) were really trying to go up and leave the meeting. I told him to get on the place, because under the current rules, the rules he had a right to speak and to give their explanations”, — told to journalists the speaker of Council of Federation Valentina Matvienko.

The head of the Federation Council Committee on social policy Valery Ryazan said “Kommersant” that “particular alarm” about the detention of colleagues right in the courtroom have not experienced, but it was “a little unexpected”. The logic of law enforcement, in his opinion, was the fact that “the procedure first, should still the deprivation of the right to inviolability”, and “you can do it in the courtroom”. Valery Ryazan said that he is not a lawyer and can “only Express their emotions”:

And they are that violate the law can not. No one is untouchable — not save a membership in the Federation Council or the state Duma, the law is one for all.

The head of the Committee on constitutional legislation Andrei Klishas said “Kommersant” that “everything went in accordance with the law on the status and regulations”, and refused to comment further.

Deputy Chairman of the faction “Fair Russia” in the Duma Mikhail Emelianoin believes that the detention of the Senator was revealing:

The power shows that she is strong, ready to fight crime, regardless of the person and connection. A simple arrest would not impressed, decided that is called, “take live” — the audience loves this, it is more likely to surprise her.

According to the MP, is indicative of the detention does not cause reputational damage to the Federation Council. “It causes the presence of such people in the upper house, — he said. Such situations could have been avoided if the Governor or the speaker of the legislative Assembly, which nominates candidates for election to the Senate, was access to documents of law enforcement agencies. A permit is needed and the leaders of the parties who nominate the candidates to the state Duma”.

First Deputy Chairman of the Duma Committee on legislation and state construction Vyacheslav Lysakov considers, “what to look for in the incident a conspiracy theory”:

The process was followed, colleagues voted to lift his immunity, and the work of SF was not disturbed by this event. Maybe this arrest was just dictated by operational feasibility: this man was easier to find in the workplace.The news

That reported about the arrest of Senator Arashukova and his father. The main thing

Mr. Lysakov sure that delegating the SF of its representatives to the authorities do not need new powers to check “their” senators. “The heads of regions and speakers of the legislative Assembly and so is not the most uninformed people on their territory, and may well inquire about those who are going to delegate in SF. Besides, nobody prevents them to officially inquire about the past of the candidates the same FSB”, — he said.

According to the Deputy of the state Duma from the Communist party Valery Rashkin, “the case with Arashukova demonstrates the need for background checks on all members of Parliament on the norms and mandates of deputies and senators”. “For the corresponding committees of the chambers of Parliament must provide for the responsibility for the fact that they “do not see” violations of their colleagues who actually have a place,” said Mr. Rashkin.