And one in honor of Cinderella. 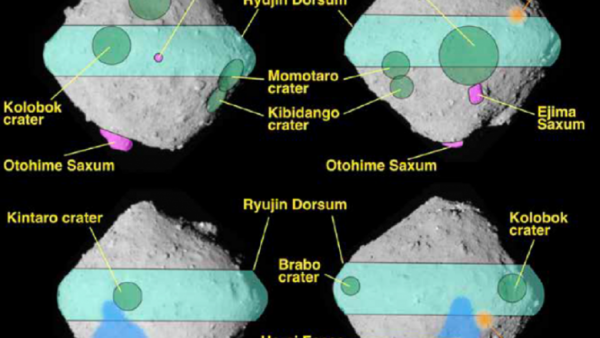 The international astronomical Union approved 13 names of parts of the terrain on the asteroid, the Ryuga, who is studying interplanetary station “Hayabusa-2”.

They are all dedicated to characters of children’s literature, and one of the craters on the asteroid was named in honor of the Gingerbread man from the Russian folk tale, reported on the website of the mission.

Automatic interplanetary station “Hayabusa-2” was launched in late 2014 and is designed to study the asteroid (162173) Ryugu. In the summer of 2018, the station has arrived to the asteroid and came to a stable orbit around it. Research program is for a year and a half and includes the study Ryugu from the orbit and from the surface. In the second half of 2018 “Hayabusa-2” successfully landed on the asteroid surface, two small re-entry module MINERVA-II 1 and the unit MASCOT (Mobile Asteroid Surface Scout), who sent a series of photographs and showed that the Ryuga is strewn with fragmented rocks and boulders of various shapes and sizes and is almost devoid of extensive accumulations of fine dust or regolith, which are often found on atmosphereless celestial bodies, which are exposed to space weathering. This can create difficulties for the execution of the main tasks of the mission to obtain a sample of the soil and its delivery to Earth in December 2020.

June 28, 2018, the day after the arrival of the station to the asteroid Ryugu, the team proposed to use the characters of children’s literature for part numbers of the relief to Ryuga. September 25, 2018, the proposal was made after consideration by the working group of the International astronomical Union, and on 12 October, the mission team suggested that the first 13 names. Nine of these types of parts of the terrain were taken immediately, and another four after further discussion in December 2018.

Most of the names relate to the characters Japanese fairy tales, in particular tales of the fisherman Urashima Taro, after which the asteroid got its name, but several names have a different geographic origin. Brabo crater in the Equatorial region Ryugu got its name after a character in the Dutch tale, Cendrillon crater, the largest outside the Equatorial belt asteroid, named after Cinderella, boulder Catafo, indicating the main Meridian Ryugu — in honor of the hero of folklore of Kaganov. Another crater in the Equatorial region of the asteroid was named in honor of the Gingerbread man, the character of Russian folk tales. Two more names (Trinitas and Alice’s Wonderland), indicating the landing modules MINERVA-II 1 and a MASCOT, respectively, are the status of unofficial and not approved by the International astronomical Union.