Ten policemen were injured during clashes in Athens

During a rally in Syntagma square in Athens against Prespan agreement with the Macedonian Skopje was injured ten policemen, according to local newspaper Naftemporiki. 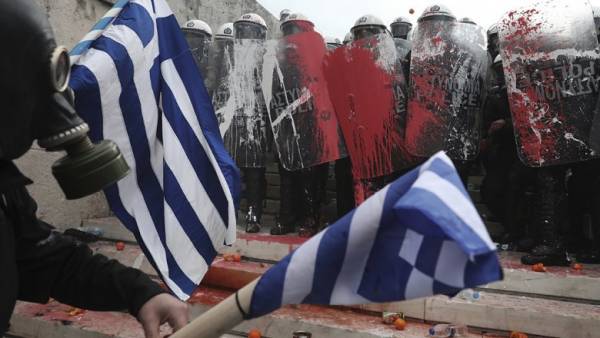 According to him, the anarchists threw stones at police while they tried to fight back with tear gas.

The publication notes that the area has gathered 60 thousand protesters. “Millions of Greeks are and will oppose Prespan of the agreement,” he wrote on Twitter former Prime Minister Antonis Samaras of being held in Athens. Megali Bretania hotel, located on Syntagma square has opened doors for the victims of tear gas.

Recall, 17 June, the Greek government signed with Macedonia the Treaty, which involves the renaming the country the Republic of Northern Macedonia. This should open the way to NATO and the EU. At the end of September in Macedonia held a referendum. The turnout was 36,91%, so the referendum was declared invalid. The majority of the citizens who came to vote (91,46% or 609 thousand people), voted for the intergovernmental agreement with Greece. On October 20 the Parliament of Macedonia supported the renaming of the country for accession to NATO and the EU.

Later on January 13 the Minister of defence of Greece Panos Kammenos has resigned and announced the launch of his party “Independent Greeks” from the ruling coalition with the party “SYRIZA”. The reason — disagreements over the renaming of Macedonia. In connection with the collapse of the ruling coalition, Mr. Tsipras has put before the Parliament the question of confidence in the Cabinet.