In Athens, about 60 thousand people came to the rally against the agreement with Skopje

ATHENS, January 20 — RIA Novosti. The rally in Syntagma square in Central Athens involved 60 thousand people, said the Greek police. This is ten times less than the rating of the organizers. 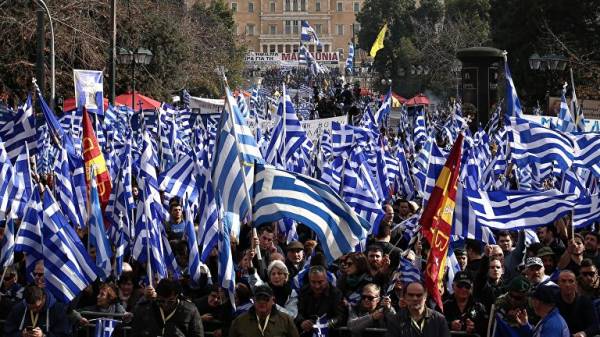 “With 14 hours (15 GMT) in the area of Syntagma square, held a rally attended by about 60 thousand people. Police Directorate of Attica takes increased security measures for the smooth conduct of the meeting”, — stated in the message.

According to police, arrived in Athens 326 buses with protesters.

The organizers said that the capital will be 3 thousand buses, and the rally will gather not less than 600 thousand people.

A rally followed by riots directed against the Prespan agreements with Skopje, resolving a dispute about the name Macedonia, which opens in Skopje from joining NATO and the EU, but criticized in Greece and in Macedonia itself.

In Greece believe that Macedonians may be called only by the inhabitants of the historic region in the Northern part of the country, not a neighboring state. In Skopje believe that the Treaty by which the country will be called Republic of North Macedonia, it destroys the national identity of the people.