“Sterpitsya — slyubitsya”. How evolved the institution of marriage in Russia

The powerlessness of women in the issue of marriage bothered even Yaroslav the Wise. To solve the problem, it took a whole Millennium. 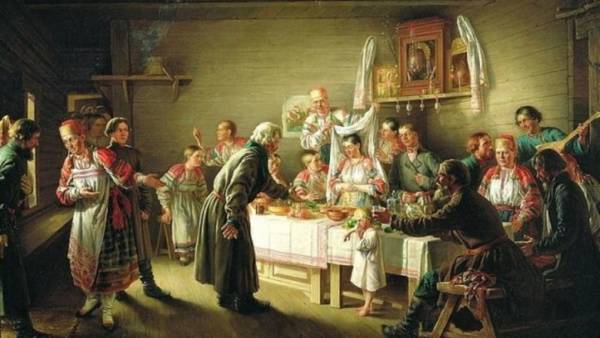 When in 1967 on the Soviet screens released film “prisoner of the Caucasus”, viewers in Central Russia not only laughed at the jokes, but sadly shook their heads, somewhere still have some friends ready to steal their favourite girls.

Half a century later, it is known that today the Caucasus republics have a tradition as kidnapping girls to join her in marriage, to get rid completely fails.

Be appalled at the manners of the highlanders, however, is still just Caucasian friends were much more traditionalists than the inhabitants of the plains.

Steal! In an extreme case — buy

In pagan era in Russia, the kidnapping of the bride groom without her consent was considered quite a normal thing. The Eastern Slavs had families so for centuries.

175th anniversary of Mendelssohn’s March: all about wedding Moscow

However, over time men have become more humane: to steal maidens did not stop, but increasingly with a girl you have to agree in advance. As they say, “the bride herself wants to be kidnapped”.

To the formation of family ties turned into a knife fight (the girls had fathers and brothers who could send to the forefathers hapless groom), decided that women can buy from their relatives.

The groom, having been to the girl’s father, offered him the money. Thus, what the Eastern peoples known as the bride price, practiced in his time in Russia.

The opinion of the supposed bride in the transaction was not considered: if the father sold it, the girl just had to accept.

Before the adoption of Christianity in Russia, there was polygamy, which, however, was not universal. How many have wives, the man had decided for themselves. As a rule, it was not a question of moral obligations and financial viability. A polygamist, for example, was the Baptizer of Rus, Vladimir Holy, but polygamy, he had to give up after the adoption of Christianity.

the Mystery of the Russian Queen. Maria staryts’ka was the last of the Rurik

With the gradual strengthening of Christianity in Russia polygamy as an institution ceased to exist.

In fact, the disenfranchisement of girls in the matter of marriage, began to disturb the authorities in the days of the old Russian state. “Russian truth” of Yaroslav the Wise forbade the parents to force the girl to marriage. If an unhappy bride has decided to kill herself, parents killed daughter, was expecting a fine and the imposition of penance.

However, these norms are very often not respected. A plus was that after the adoption of Christianity stealing the bride became smaller. Disadvantage lies in the fact that marriage is increasingly not depended not only on the opinions of the bride, but also from the desire of the groom.

The wedding of the young in the temple was preceded by a conspiracy of parents and the engagement. Marriage has become a form of cooperation between different families, a kind of business where the guy and the girl acted as assets.

The opinions of the newlyweds very often do not ask. “Cell of society” in that period was formed when brides were 12-13 years old, and grooms — not more than 15.

Before the wedding is engaged, the groom and the bride could not only talk, but even to see each other.

To see the bride in the form of an exception could only senior fiance who really wanted to intermarry close girls. Most of the boys could the first time to see the face of the one who had to spend all my life, but at the wedding table, after the wedding.

Sometimes grooms, greatly deceived in hopes, raised a rebellion, seeking an annulment. But most of them have to be content with their lot. So the saying “it runs in the family” in Russia was not addressed to women only.

I do not know arithmetic — men are no good

In the XVI century appeared the famous “Domostroy” or “Book called “the Domostroi”, which contains useful information, teachings and guidance every Christian — the husband and wife, and children, and servants and maids”.

Pensioner found love and married at the age of 93

“Domostroy” in the area of family relations, reinforcing the already established Patriarchal traditions, according to which the husband acted as the procurer of food, and the wife as mistress of the hearth. Virtues of the wife were declared hard work, kindness and silence. It is clear that the chance to build a personal life in its desire to have Russian woman almost was not.

Peter the Great, reforming the country, and attended the institution of marriage. One of his edicts repeated the provision of the “Russian truth” of Yaroslav the Wise, proclaiming the principle of voluntary entry into marriage. Relatives of the persons entering into marriage, were obliged to take an oath that forced the bride and groom to the Union.