Russia and Japan went into the differences

The negotiations on the peace Treaty and the Kuril Islands are in a raised voice. 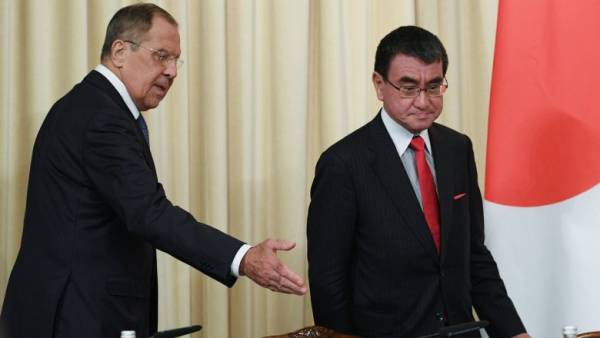 The final visit to Moscow by foreign Minister Taro Kono and his Russian counterpart Sergei Lavrov yesterday held talks on the Kuriles and peace Treaty. Despite the appeal of Taro Kono to make 2019, “history”, his visit revealed the increasing difficulty of dialogue between Moscow and Tokyo before scheduled for January 22 meeting of Russian President Vladimir Putin and Japanese Prime Minister Shinzo Abe. Following the talks, Sergey Lavrov acknowledged the “substantial differences.” Taro Kono, abandoning a joint press conference with his Russian counterpart, was limited to a closed briefing for the Japanese media. According to the respondents “Kommersant” diplomats and experts, the “window of opportunity” for the historical agreements between Moscow and Tokyo may be closed.

The summits in winter and summer

Today, ending a five-day visit to Moscow heads the Ministry of foreign Affairs of Japan Taro Kono became the latest reshuffle on the eve of a new meeting between Russian President Vladimir Putin and Japanese Prime Minister Shinzo Abe. Managed to hold for over twenty meetings with the President of the Russian Federation Prime Minister Abe last week announced the intention to talk with him.

In the third week of this month I will pay a visit to Russia and hold talks.Shinzo Abaranger Japan

He is expected to make a stop in the Russian capital on the way to the world economic forum in Davos. The summit is scheduled for January 22, said in Moscow yesterday, Taro Kono.

The main topic of his talks with Sergey Lavrov became the peace Treaty between Russia and Japan. “Our deputies, as stipulated by our leaders when they agreed to intensify work on peace Treaty based on the 1956 Declaration, will continue specific contacts,” — said the Minister of foreign Affairs of the Russian Federation.

In turn, Taro Kono expressed the determination “to make 2019 a productive and historic” relations between the two countries. The Japanese Minister urged “to accelerate the negotiation process, going beyond the previous position”, giving to understand that the repetition indicated earlier approaches Tokyo is not satisfied. According to him, the Japanese side also has high hopes for Vladimir Putin’s visit to Japan, which will take place in June, when Osaka will host the G20 summit.

Trying to create a positive attitude, the Minister Kono even joked that coincided with his visit to Moscow warming after severe frosts became a good sign.

“Thank you that you have done the above temperature in Moscow for me,” he flashed a subtle Japanese humor Taro Kono.

Everyone says about your

However, despite the polite gestures and expressions of resolve to go forward, the parties were unable to hide the growing difficulty of their dialogue.

I will not hide, we still have significant differences.Sergey Lavrovgave the Ministry of foreign Affairs of the Russian Federation

On the eve of the talks, he felt it necessary to call upon the Japanese side to work “professionally, without trying to distort the agreement, without injecting conflicting, one-sided rhetoric in the public space”.

Recall that last Friday, the Russian foreign Ministry had summoned the Ambassador of Japan in Russia Touchesa Kozuki in connection with calls Tokyo “to achieve understanding” of the residents of the South Kuril Islands on the question of “the transfer of territorial belonging of the Islands to Japan.” While Moscow has accused Tokyo of gross distortion of the essence of the agreements of the leaders of the two countries to accelerate the negotiation process on the basis of the 1956 Declaration (see 10 January).

Yesterday Sergey Lavrov presented new claims Tokyo, calling “outrageous” the statement of adviser to Prime Minister Abe, Kazuyuki kawaii, who, during his visit to Washington said that “the United States should be interested in concluding a Treaty between Russia and Japan because it will strengthen the bloc to contain China.”

The Russian foreign Minister also reminded that a necessary step for further negotiations should be the recognition by Japan of “Russia’s sovereignty over all the Kuril Islands”.

According to the respondents “Kommersant”, the Russian diplomats and experts, the talks of Lavrov and Kono in Moscow indicate that the Russian side has significantly tightened the tone of the dialogue in Tokyo on the eve of a new summit between Vladimir Putin and Shinzo Abe. “The recent statements of the Russian side addressed to Tokyo, designed in a much tighter way than the statements of the end of last year. This can mean two things: either attempt to increase initial position on the eve of the summit, or to prepare the ground in order to refuse force a decision on the peace Treaty issue”, — explained “Kommersant” a former Russian Ambassador to Tokyo Alexander Panov, who headed the diplomatic mission of the Russian Federation from 1997 to 2004. According to him, if the two leaders fail to agree, the “window of opportunity” to solve the problem permanently closed.

A similar opinion in an interview with “Kommersant” expressed the head of chair of Oriental studies MGIMO-University Dmitry Streltsov. “With the arrival of Shinzo Abe, the Japanese side has softened its position and refused from the strict requirement to give her all four Islands of the Kuril ridge. It is highly likely that if this matter is not resolved at the premiere of Abe, a chance to negotiate will be lost,” said Mr. Sagittarius.

Evidence of the growing tension in relations between Moscow and Tokyo was the unexpected refusal of the Minister Kono from the joint press conference with Sergey Lavrov. Instead of communication with the Russian Minister Kono last night held a closed-door briefing for Japanese journalists in the hotel “Hilton”. As told “Kommersant” a diplomatic source in Tokyo, the Minister Kono was at the briefing “very reserved”. He admitted that between the parties, “there are differences”, but, he said, “we must find common ground”. According to him, in addition to the meeting of Vladimir Putin and Shinzo Abe, the parties agree on a new meeting of foreign Ministers of the two countries at the international security conference in Munich.