The split in the Orthodox world officially enshrined — Ecumenical Patriarch Bartholomew signed a Tomos of autocephaly of the so-called “Orthodox Church of Ukraine.” However, this does not mean that “divorce” over — creating “a new Church” in Ukraine has long been part of the political process, and, therefore, the persecution of the UOC of the Moscow Patriarchate will continue, experts say. What are the consequences Orthodox world, to understand “Газета.Ru”. 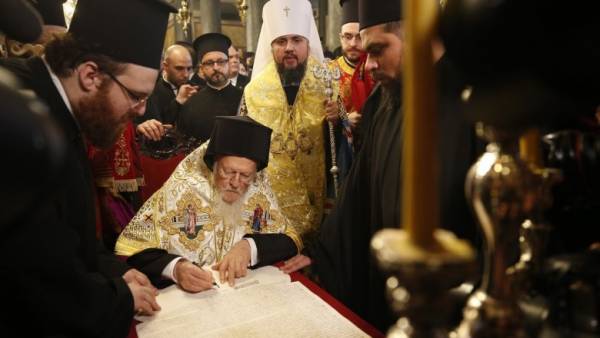 5 Jan Constantinople finalized the split in the Orthodox world, the Ecumenical Patriarch Bartholomew signed the Tomos of autocephaly “of the Orthodox Church of Ukraine,” non-canonical Church structures.

Despite the fact that the event must be exclusively religious in nature, the signing ceremony was attended by President of Ukraine Petro Poroshenko, Minister of defense Stepan Poltorak, the ex-President Viktor Yushchenko, speaker of the Verkhovna Rada Andrew Parubiy and other Ukrainian politicians.

Indeed, the politicized decision of Constantinople called not only in Russia but also in Belarus, and even Poland, which is quite difficult to suspect of sympathizing with the ROC.

In particular, the Metropolitan of Warsaw and all Poland Sawa in a letter to Bartholomew wrote that the “unification Council” held in Kyiv on December 15, did not solve the problem of schism, and only further worsened it. Moreover, according to the Polish Metropolitan, the Cathedral “brought to the society a lot of painful phenomena, not only religious but also socio-political”.

Question about getting Ukraine’s autocephaly was raised periodically over many years (this task put in front of him still Victor Yushchenko in 2008), but in active phase, he came in only when the process involved Petro Poroshenko, moreover, the establishment of an independent national Church, he made one of the points of his election program (although officially in the presidential race Poroshenko has not entered).

Here on his hand plays deideologization Ukrainian society, the Director of the Ukrainian center of social researches “Sofia” Andrey Yermolaev.

In this regard, [the Ukrainian government] is looking for new institutions and areas that could compensate for emotional balance and spirituality. One of these areas, obviously, becomes religion, which today, unfortunately, is highly speculative due to its diversity.Andriy Yermolayev Director of the Ukrainian Center of social researches “Sofia”

In fact, it turns out that Poroshenko, leading the process of establishing Autocephalous “Church” is trying to become not only a political leader, but partly to lead a religious movement in Ukraine.

“[Ukraine] is really in a situation when it accumulated issues, like poverty, spiritual problems connected with the search of moral authority, and very complex history of interfaith relations may be added the problem of electoral processes.

This can lead to what I warn many Ukrainian policy — to conflict of the nature of religious wars, says Yermolayev.

Poroshenko has promised that Ukraine will ensure compliance with the principle of freedom of religion, however how it will be organized and will not intervene if “civil society”, the votes which in recent years Ukraine became a right-wing-minded organizations, is unclear.

The press service of the canonical Ukrainian Orthodox Church has reported that the radicals of “Right sector” (an organization banned in Russia) announced the intention to organize provocations near the Cathedral in Chernihiv “to force believers of UOC-MP to move to a new “Church education”.