“Yellow jackets” in Paris broke into the Ministry

Press Secretary of the government of Benjamin Hryvnia, who attacked the “yellow jackets” in his speech yesterday, January 4, was forced to flee from the building of the Ministry of relations with the Parliament during Saturday’s demonstration. At 16:30 local time (18:30 MSK) group “yellow jackets” were dropped off the doors of the building on the Rue de Grenelle and, bursting in the yard, start a pogrom. They were quickly driven away, but the Ministry had to be evacuated. 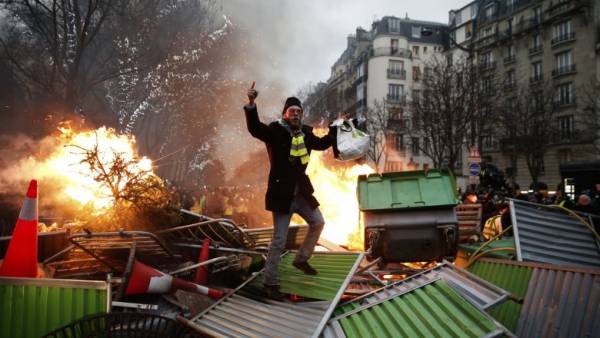 “Movement “yellow jackets”, referring to those that are still have become in fact the agitators, who want to revolt and overthrow the government,” said January 4, Benjamin Hryvnia. The attackers came to confirm his words with actions.

Earlier, a crowd of demonstrators, diverging after the onset of the “yellow jackets”, rioted in the centre of Paris. On the Boulevard Saint-Germain was burned cars and motorcycles.

“Yellow jackets”, flooding the island, marched to the National Assembly on the quays of the Left Bank. A few fights with the police occurred on closing the bridges, especially on the pedestrian bridge near the Orsay Museum. By 17:00 Moscow time the March came to the end, protesters were outside the National Assembly, the approaches to which are closed by the police. The protesters clashed with the police. Police used tear gas.

About activity of movement “yellow jackets,” read the publication “Kommersant”.