In India women have built a living wall with a length of 620 km, demanding equality

NEW DELHI, 1 Jan. /Offset. TASS Evgeny Pakhomov/ — the Reason for this action was the prohibition of Indian women aged 10 to 50 years to visit the in Kerala the temple of God Ayyappan. 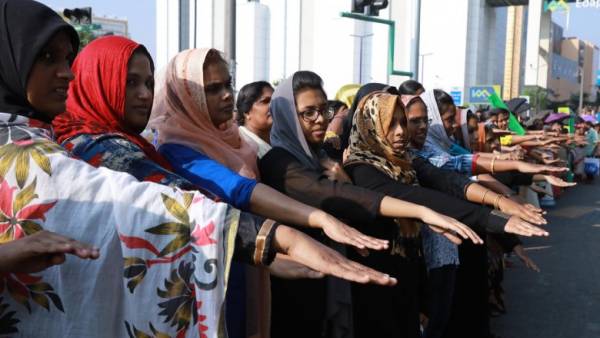 Living wall with a length of 620 kilometres, lined up Tuesday women Indian southwestern state of Kerala to symbolise the unity of Indian women in the struggle for their rights and equality. As the channel NDTV, the campaign has gathered, by different estimates, from 3 to 5 million participants.

“The wall” was built along the highway between the towns of Kasaragod and Thiruvananthapuram. Among the participants were famous Actresses and female politicians representing various political forces, who came to Kerala specially for this event. The wall stood and the members of the regional government.

“The goal of this process is the formation of women’s wall — to promote gender equality. Women no longer have to face the dark aspects of life”, — quotes the edition of the words of the well-known activist of the Communist party of India (Marxist) Brinda Carats.

The reason for the action was the scandal around the ban on women aged 10 to 50 years to visit the in Kerala the temple of God Ayyappan.

In September last year, the Supreme court of India issued a verdict, terminating the centuries-old tradition in which girls and youngish women were not allowed in this one of the most famous temples of India. The Supreme judges have asked to open it for women of any age from 17 October. However, until now, no woman managed to enter the temple, as the pilgrims-men throwing stones and sticks, any Indian that tries to even approach the Shrine.

According to the lawyer hired by the Church to protect the rights of God that India has allowed Ayappan does not want to see in his house of women aged 10 to 50 years, since he was a bachelor. In the walls of the Shrine should be open only to girls 10 years or Indian girls at the age.

Interestingly, in the other temples of the same God all women are allowed freely, regardless of age. It is pointed out in the verdict of the Supreme court. But in this temple of Ayyappan, considered the master in his cult, orders a special.

And explain why it happened, no one can, even the brahmanas of the temple.

However, the temple Ministers, the Brahmins consider themselves bound to chastity for God. Although it is difficult to assume that could damage the chastity of a stone image.

God Ayyappan considered the son of both the Supreme God of Hinduism, Shiva and Vishnu. His main temple is located in Kerala district of Sabarimala one of the most popular pilgrimage destinations not only in India but all over the world. The local Shrine is visited annually by 45-50 million believers. And Indian women offended that they are closed doors one of the most famous shrines.

The police had not helped women to enter the temple. Yet, even law enforcement officers cannot carry through a crowd of outraged men, a few women pilgrims. Why Indian girls and decided to organize a living wall.

The organizers of the “women’s wall” emphasize that its purpose is much broader than just a protest against non-admission of ladies to the temple. The main purpose of this event is to call for a joint struggle for equal rights for women and men.