The presidential elections in Georgia were special. For the post fought former citizens of France and Russia. 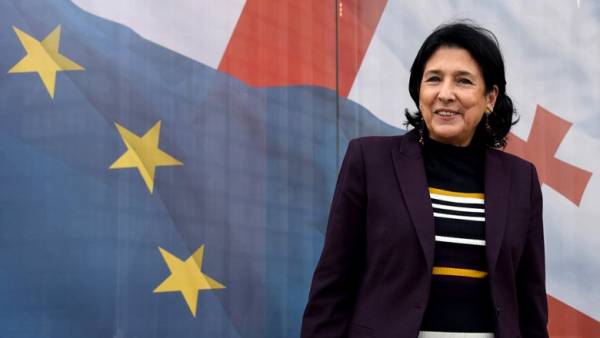 This will be the first President who will work for five or six years, and the latter elected directly by the people — the following will appoint the electors. Finally, for the first time the fight reached the second round. Two of the 25 candidates were in the first round neck and neck: a 66-year-old Salome Zurabishvili received of 38.64%, a 60-year-old Grigol Vashadze — 37,74%.

In the second round the victory was won Zurabishvili. According to the CEC of Georgia, voted for the 1.1 million Georgians, and 59.5% came to the polls. Zurabishvili supports the ruling party “Georgian dream” billionaire Bidzina Ivanishvili. Vashadze is a supporter of former President Mikheil Saakashvili.

The President of Georgia — now the figure is symbolic, and the real power in the hands of the Prime Minister. But the President has political influence, which is important ahead of the elections to the Parliament in 2020

Zurabishvili has repeatedly proved its ability to defend its interests, even if all against it.

Why Zurabishvili spoke no French

“I was born in France, so it is correct to say that I am not an immigrant, I’m a real French girl, as echoed by my mother,” said Zurabishvili radio France Inter. One grandfather was the initiator of the construction of the sea port in Poti and the Georgian railway. The other part of the government of the Georgian democratic Republic, founded after the October revolution. In 1921 both fled from Georgia at the approach of the red Army.

Her mother was born in Istanbul and was in France at 4 years. Father Levan Zurabishvili, was born in Tbilisi, and at age 14 was in Paris. He passed a path from engineer to a top Manager of the car company Simca (later Chrysler France), but is known primarily as the man who rallied the local community and the former Chairman of the Georgian society in France. Under the influence of his father, Zourabichvili went on the anti-Soviet rallies and translated articles dissidents.

In the house talked in Georgian, so enrolling in the first grade, she could not communicate in French and two words. This has not prevented it to become the year’s best student. Now she is a polyglot, speaks Georgian, French, Italian, English, can speak German. Understands Russian. “My father used to tell me I need to know the language of the enemy” jokes the new President of Georgia (quoted by the newspaper Libération).

In 1972 received a diploma of the Institute of political studies of Paris (Sciences Po), Zurabishvili went to new York. There she graduated from the Russian Institute of Columbia University (USA) and decided to become a diplomat. To do this, she returned to France and on interview in the Ministry of foreign Affairs said that he loves to travel and dreams of one day becoming the Ambassador of Georgia in any country. But her career began with the more modest post — third Secretary of the Embassy of France in Rome. There 22-year-old Zurabishvili met her first husband, who was born in Iran, married a Georgian and Ukrainian.

Zurabishvili accused of being too distant from the problems of their homeland. The first Georgians-reemigrate she saw only 8 years old when in Paris, he toured the Georgian ballet and artists secretly went to visit the local Diaspora, she told The Washington Post.

In Georgia she visited for the first time in 34 years. By the time she was an employee of the French Embassy in Washington, but took leave to accompany the mother on the trip home.

By this time her marriage began to crumble. As explained Zurabishvili, with her husband, they were too different people and even the daughter and son could not hold their marriage. Immediately after which it in 1989 with the kids for three years, went to the Embassy in Chad. On her return married the second time Georgian dissident, Genre Cascia, journalist and philosopher. It was called the greatest love of his life. He died in 2012

As Zurabishvili was in Georgia

In March 2003, fulfilled a dream Zurabishvili — she became the Ambassador of France in Georgia. When it has occurred “revolution of roses” and coming to power of Mikhail Saakashvili began dialling the government, giving preference to young, educated in the West and no connections with the former regime.

“I still find it hard to quickly read in Georgian. Can’t run the text on a diagonal, as in French” — she confessed to Libération. She spoke fluently, but sometimes slipped, the momentum from the nineteenth to the legacy of life among migrants.

The Georgian foreign Ministry, where he worked for 390 people, was known among the Georgian officials disorganization and poverty. Employees received 50-80 gel, which at that time was equal to 25-40 Euro and did not avoid corruption. “My Ministry has still not informed me even about what is happening in the country,” complained Zurabishvili (quoted by Libération).

For Russia one of the most important outcome of its activity was the Georgian decision to withdraw from its territory Russian military bases.

In an interview with “Novye Izvestiya” Zurabishvili promised that in the country there will be no foreign bases, but did not consider it appropriate to record it in writing. French radio France Inter, she said: “My biggest achievement was the establishment of ties with Europe and France and the reform of my office.”

Reform, however, proved ineffective. Zurabishvili told about the problems of the Ministry of foreign Affairs in October 2005 in a live broadcast of “Rustavi-2”. She called herself a foreign body in the corrupt system of the Ministry of foreign Affairs, complained that many ambassadors don’t listen to her — especially appointed on the initiative of the speaker of the Parliament Nino Burjanadze’s representatives in the UN, the US and Ukraine. Finally, she said the attempt of the Communist-clan revenge and establish the dictatorship of the clan, referring to the parliamentary majority of the party “United national movement”.

From Burjanadze and the parliamentary majority was also a lot of claims to Zurabishvili. She was accused of appointing relatives to positions of ambassadors, following the interests of France in politics and contempt of Parliament. Besides live Zurabishvili used an offensive word “Kaji” (“hillbilly”, “savage”). A conflict between two women ended with the fact that 20 minutes after the speech, Zourabichvili, Prime Minister Zurab Nogaideli made the decision of changing the head of the foreign Ministry. Minister Zurabishvili spent a year and a half.

What Zurabishvili speaks about Russia

“Our goal is NATO and the EU. There is no alternative. Russia does not offer any prospects,” — said Zurabishvili on radio France Inter.

They are all unpredictable — trump, Putin, Erdogan, Iran, — she added in an interview with the FT before the first round. And all our environment is. Russia is much tougher than in the days when I resist [as foreign Minister]. This is the same Putin, but is not the same. It is much tougher.

“In General, I’m really motivated to negotiate, because I’m a career diplomat. For countries like Georgia that cannot use the armed forces if you are depriving yourself of the tools of diplomacy, what remains? What we have now: we are in isolation. But at the same time, I don’t see how in any shape to resume dialogue with Russia — that what it is now, with the style of negotiations of Putin. They give us nothing on the basis of which can be in any shape to resume the dialogue, and even reasonable expectation, that the dialogue somewhere.”

The Georgians associated with the ancient Greeks

Fallen on hard times — program husband Zurabishvili on the TV channel Imedi was closed, the couple was left without a job. “We were alone with no money, no livelihood, no flats. We lived in the apartment of the Ministry”, — quotes its Agency Sputnik. Zurabishvili decided to try his hand at politics and opposition have created a “Social movement Salome Zurabishvili” (since 2006 — “the Way of Georgia”). In 2010, she disappointed in him: “there is no minimum of democracy for the existence of the opposition” (quoted by Sputnik), went to France and as a diplomat with the experience gained the position of head of the UN working group on the Iranian problem.